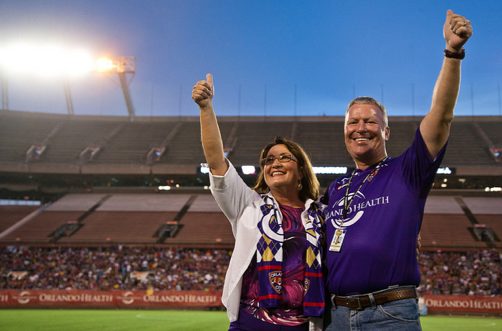 Commissioners Ted Edwards and Fred Brummer voted against after six hours of public comment and discussion.

This was the final vote needed to approve the funding. At this point it will be up to final negotiations with Orlando City Soccer and Major League Soccer to bring an MLS team to Orlando.

MLS President has stated the an MLS team in Orlando would follow approval of a soccer specific stadium. Telling the Orlando Sentinel, “Once we finalize that, we will have a Major League Soccer team here. A franchise could be awarded as early as November. The Lions would begin play in MLS in Spring 2015.

“We are ecstatic about the positive vote,” said Orlando City President Phil Rawlins in a written statement. “Our fans have been the driving force behind the effort to bring MLS to Orlando. This one is for them.”

The $94.5 million plan allows for Tourism Development Tax revenues to be spent on various venues and tourism marketing including $20 million to help fund the soccer stadium and $25 million towards the second phase of the Dr. Phillips Performing Arts Center.

In addition to $20 million to fund the soccer stadium and the $25 million towards DPAC, the $94.5 million plan includes: