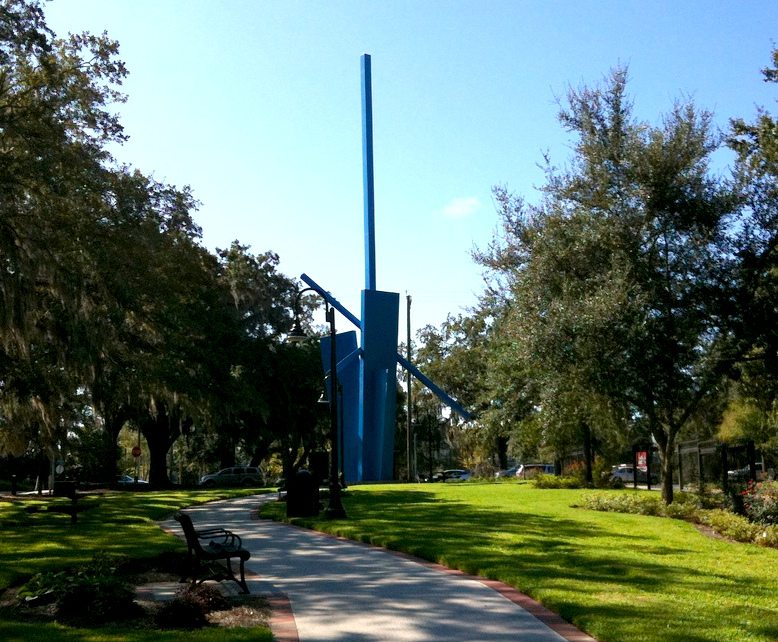 A new sculpture is being installed at the Orlando Museum of Art at Loch Haven Park.

The new sculpture is titled Quark and is by sculptor John Henry. The 70 foot sculpture weighs over 20 tons and is described as an abstract composition made of wielded steel.

From the Orlando Museum of Art:

This week Quark is being uninstalled from Gaines Street in Tallahassee where it has been since 2008.

It will then be reinstalled on the Mills side of the Museum in Orlando’s Loch Haven Park [GMap]. Installation will begin on Tuesday, December 17, 2014.  The sculpture will be on display adjacent to the Orlando Museum of Art from December 18, 2013 to January 1, 2016.

“Making the Orlando Museum of Art accessible to a broad audience is a priority,” says Museum Director Glen Gentele.   “Quark will certainly enhance this message in our community.”

Quark is one of the seven sculptures Henry installed across seven different Florida cities. It be installed on the same site as Henry’s pervious sculpture Chevron Blue.

“John Henry is one of the few sculptors today that work on the scale of Quark.  The massive steel forms of this monumental sculpture create sweeping gestures in space that lift the eye and the spirit. Quark will be an excellent addition to the Orlando Museum of Art’s park side landscape for the 90th anniversary celebration,” said museum curator Hansen Mulford.

Photo of Quark in Tallahassee by Flickr user Shawnson.