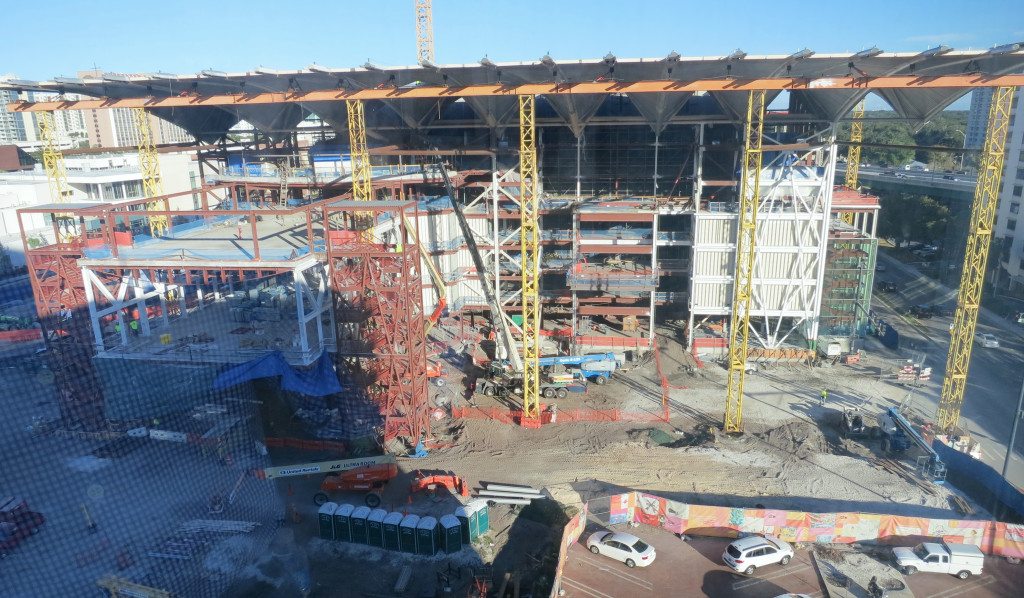 The Dr. Phillips Center for Performing Arts is set to open in the Fall of 2014.

The first phase of the 330,000 square foot building will include two of the three main theaters, an outdoor plaza and performance space, an event space above Magnolia Ave, the main lobby, backstage area and classroom space.

The project sits on two blocks bordered by Orange Ave and Rosalind St on the west and east and South St and Anderson St on the south and north. Once the project is complete Magnolia which divides the property will be reopened.

Construction for the nine-acre project began in June 2011 and is set to open the first phase in the Fall.

No additional parking is planned as part of the project and instead they will make use of the six parking garages within a 5-minute walk.

The first announced performance will be Newsies as part of the Broadway Across America series.

Here’s an overview with construction photos and renderings of each of the components of the first phase: 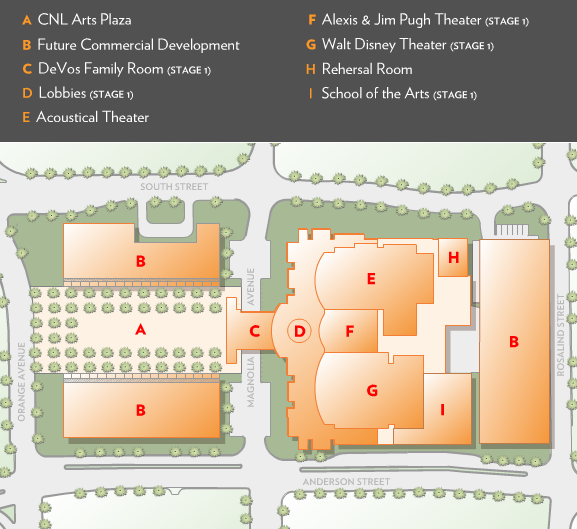 Walt Disney Theater — The Walt Disney Theater is the largest theater space in the new center. This is where the traveling broadway series will perform. The theater seats around 2,700. The actual size of the theater will be smaller than the Bob Carr theater but will seat more. The theater itself is more compact (although there are plenty of aisles) and includes two balconies. When you walk into the theater you immediately notice the difference. We walked in on the mid-level balcony and from the back had a great view of the stage (minus the scaffolding in the way). 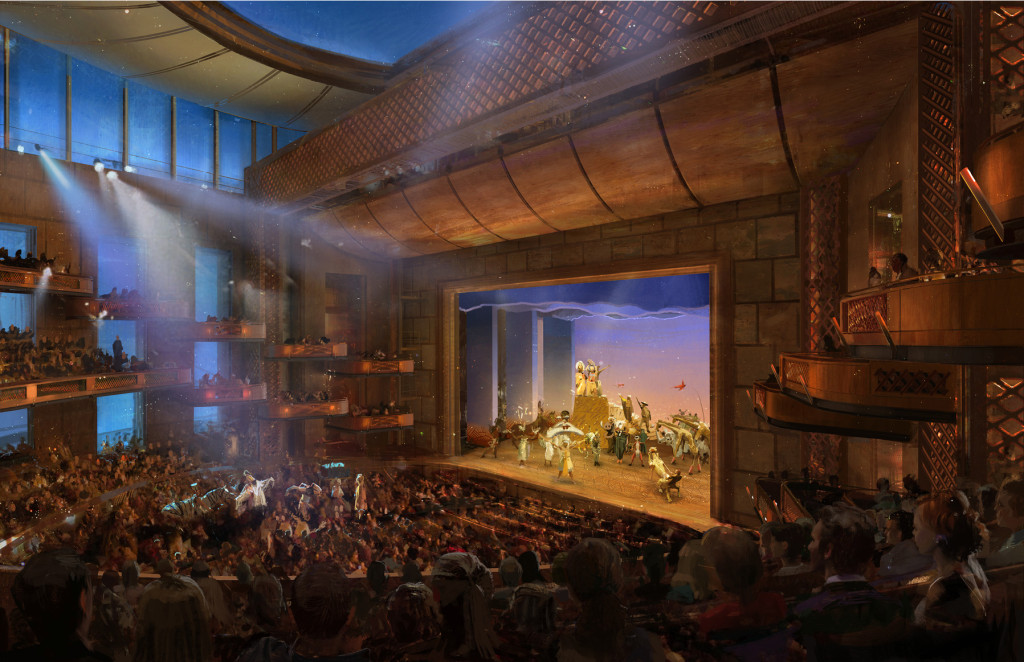 Alexis & Jim Pugh Theater — This theater is also referred to as the community theater. This 300 seat theater is a multi-purpose room ideal for theater, dance, music and education. The layout is a U-shape with the stage extending into the audience area so it is surrounded on three sides (known as a thrust stage). The orchestra level seating can also transform into a flat floor for performance, banquets and events. UCF performing arts students will perform in the theater for part of the year. 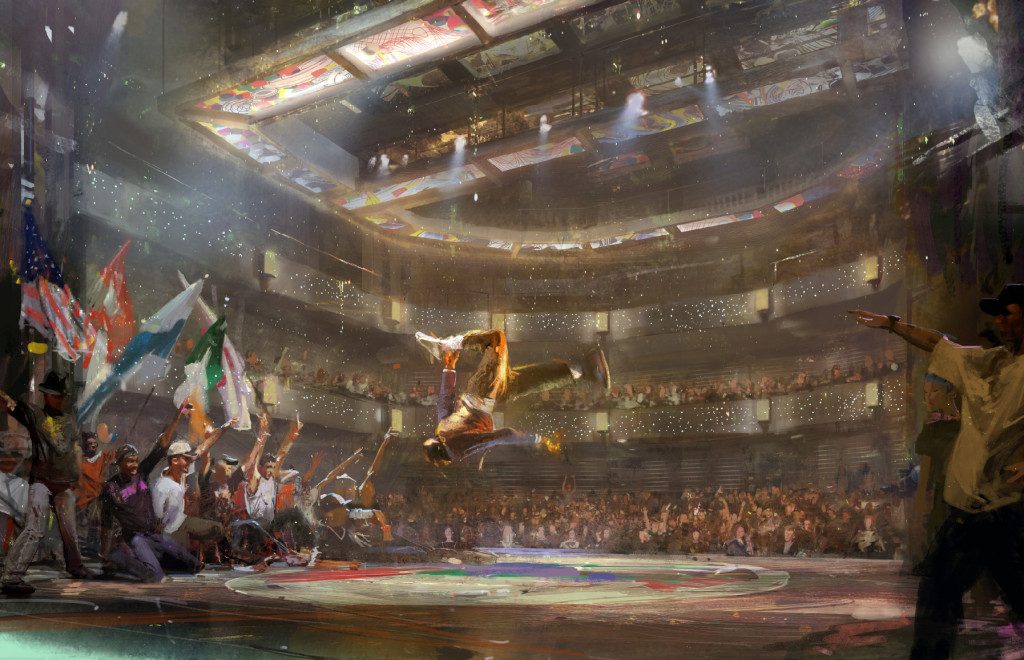 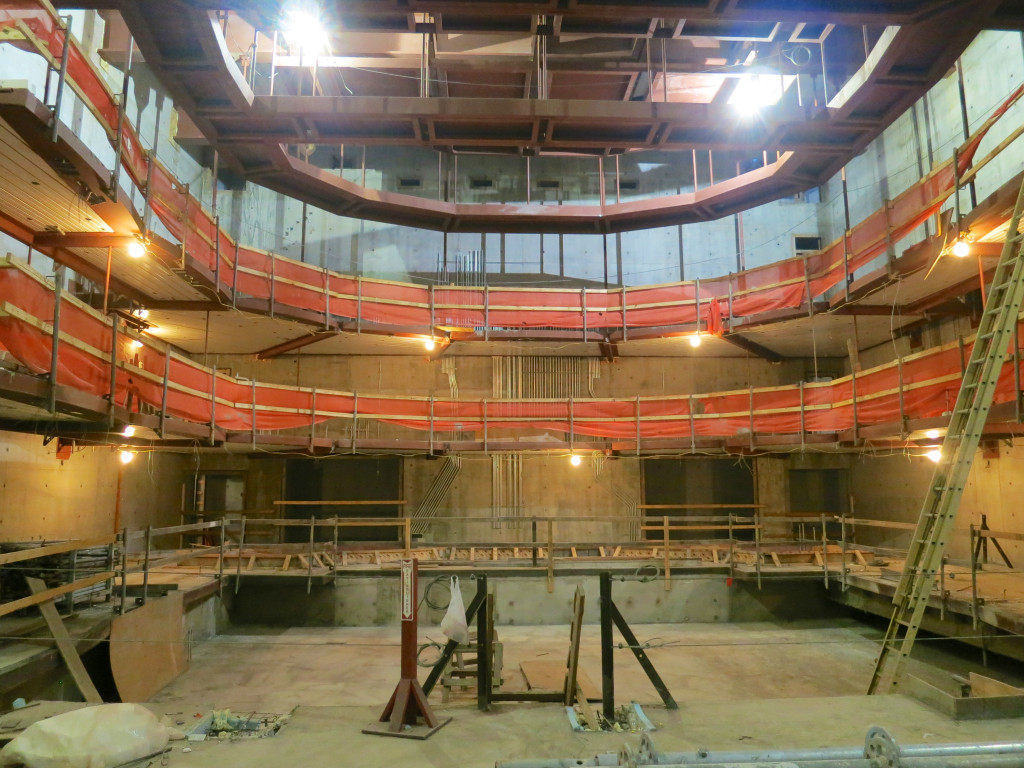 CNL Arts Plaza — The CNL Arts Plaza is the main plaza area in front of the Dr. Phillips Center. The plaza begins at Orange Ave and ends at Magnolia Ave where the actual building is. The plaza itself will be flanked on both sides with mixed use buildings with ground floor retail. While the two building aren’t going to be built until phase II at the earliest, the plaza itself will be somewhat completed as part of Phase II. The mixed use building could end up being anything from a hotel to offices or residential. The Bungalower has learned of such ideas ranging from live music concerts to yoga in the plaza. The estimated capacity is around 3,000 people. The plaza in addition to the two buildings will sit on one entire city block. 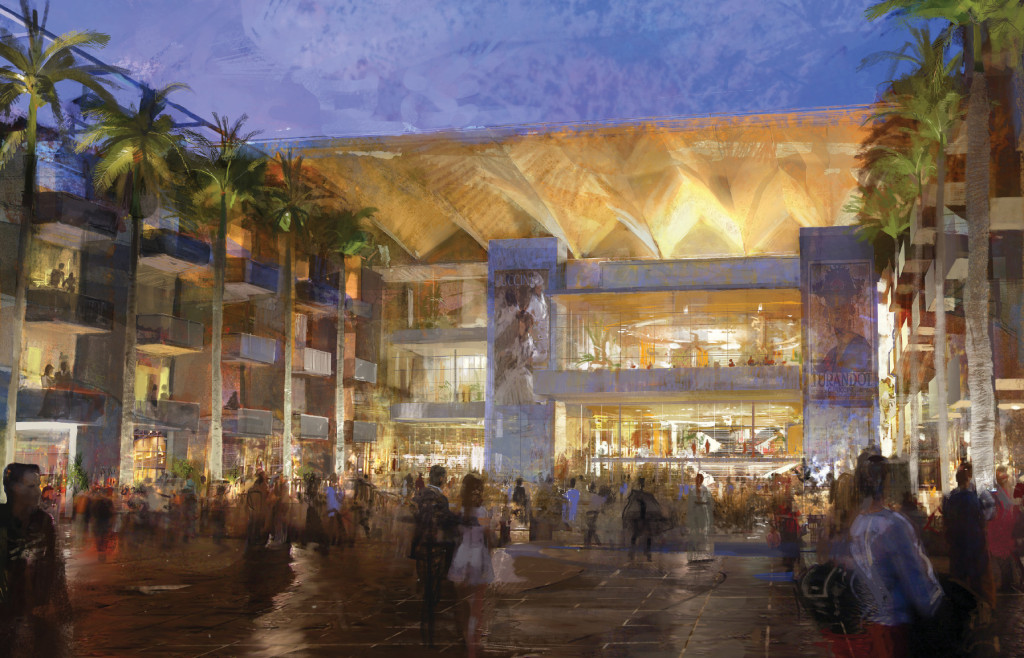 DeVos Family Room — The DeVos Family room sits above Magnolia Ave and overlooks the CNL Arts Plaza. The floating glass room seat 300 and will be perfect for weddings, galas and community events. The Bungalower understands they already have a wedding booked there. 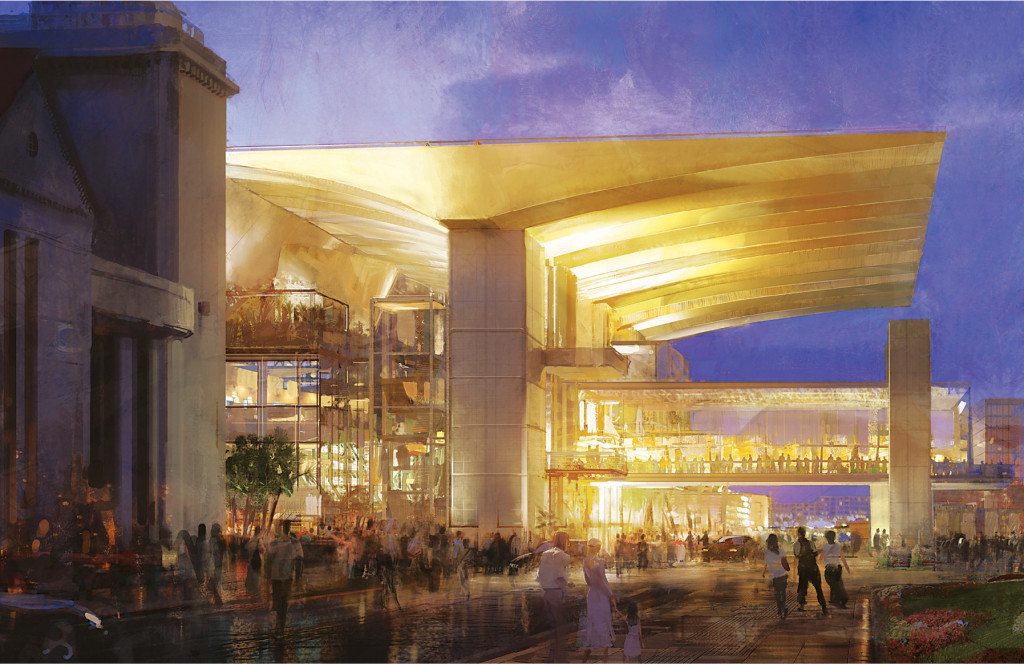 Main Lobby — The lobby is what the Dr Phillips Center is calling the, “theater before the theater”, will be the main entry way for all of the theaters and will have concession areas, bars and ample restrooms. The lobby will span five stories. The main focal point being the “Wave Wall” which separates the lobby from the theaters and will be what is seen from outside the building since the building is mostly glass. The lobbies for the Walt Disney and the Alexis & Jim Pugh theater will be built in Phase I. 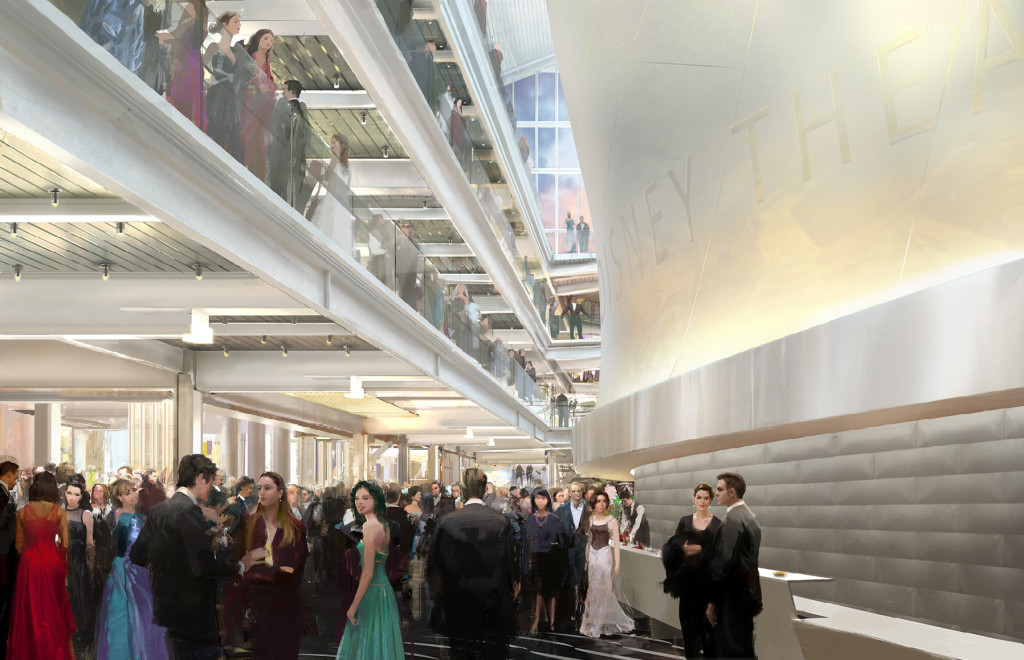 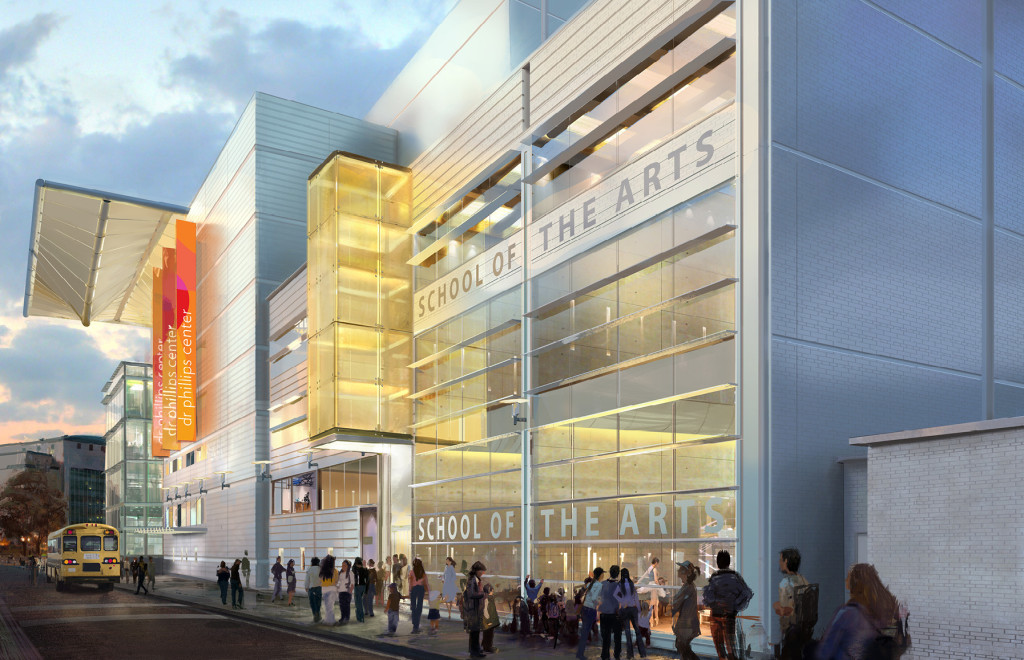 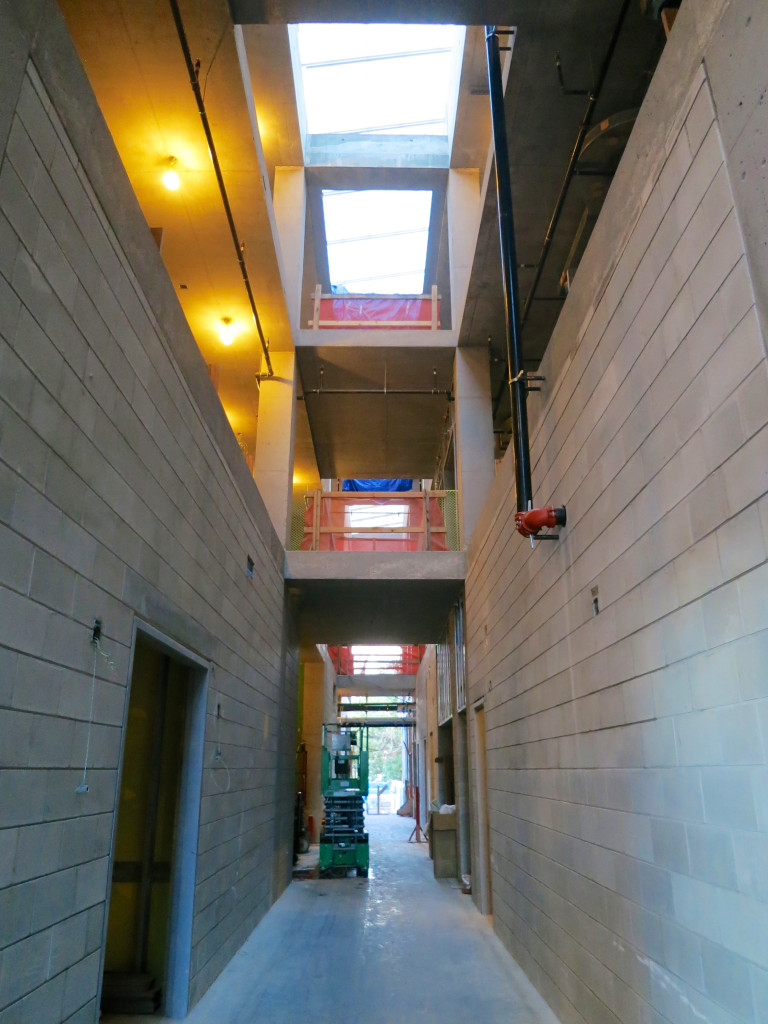 If the Dr. Phillips Center is able to raise an additional $37 million for the second phase (on top of the $477 million already pledged for the first phase) they hope to start construction in the Fall once the first phase opens.

Until the second phase is completed the building will look unfinished. The staff at the Dr. Phillips Center say this is by design. The building will appear off-centered because when looking at it from the front he left (norther) portion will be missing. You can also see this in the first photo posted on this article. 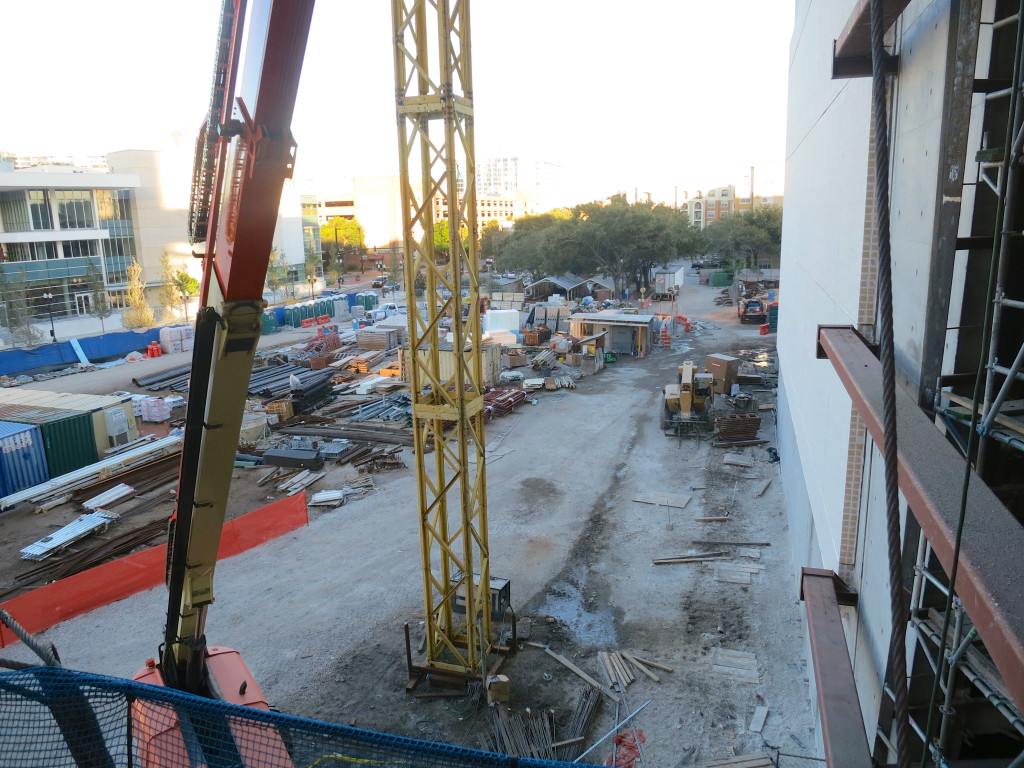 The Acoustical Theater will have a capacity of 1,700 seats. It will be an theater that that can transform in both shape and natural acoustics to accommodate different performances including symphony, opera and ballet. The transformation is achieved by moving the shell and towers to arrange them  in an ideal fashion for each type of performance. The lobby and back stage area would also be expanded to fill the entire property. 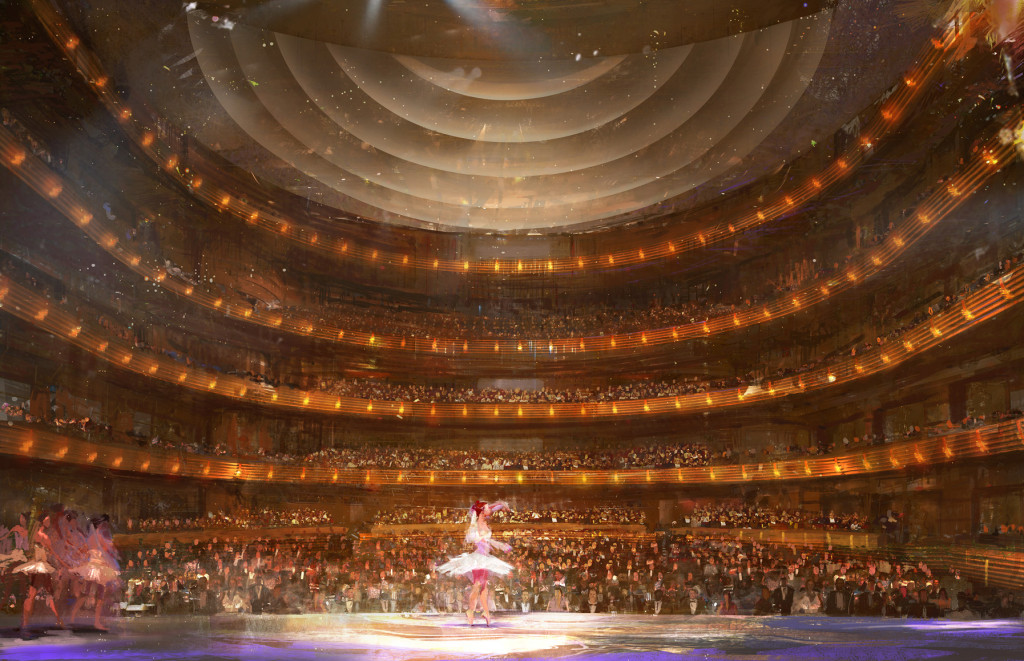 Because the acoustical theater is more costly to build, the Dr. Phillips Center staff said that completing as part of the first phase would have produced an operating deficit.  “The 2,700-seat Walt Disney Theater; however, provides optimal revenue opportunity and can accommodate the needs for the majority of all resident arts groups,” the Dr. Phillips Center website reads.

The large rehearsal room could be used for banquets and meeting space in addition to rehearsals and small performances.

We’ll continue to keep you posted on the progress of the Dr. Phillips Center as the construction continues and performances begin to be announced.

All renderings courtesy Dr. Phillips Center for the Performing Arts