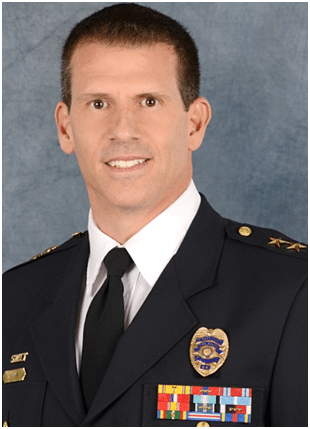 Mina, a 23-year OPD veteran, takes over for Chief Paul Rooney who announced his retirement after being with OPD for nearly 28 years.

Dyer’s appointment is subject to the approval of City Council which is scheduled for February 24.

Here’s the complete press release from the City of Orlando:

“Over the last three years, under Chief Rooney’s leadership our City has continued to see reductions in violent crime year after year,” said Mayor Dyer.  “Chief Rooney launched new domestic violence initiatives, enhanced outreach and support to the elderly, initiated a body camera study, placed a new emphasis on officer safety and training and made succession planning a priority.”

As the newly appointed Police Chief, John Mina, 45, will oversee the day-to-day operations of the department and serve as chief counsel to the Mayor in matters of public safety.  During his 23-year tenure with the Orlando Police Department, Mina has worked in a variety of divisions, including the West Patrol Division, the Criminal Investigations Division, the Community Policing Division, the Training Unit and the Drug Enforcement Division.  He has also served as the Division Commander for both the North Patrol Division and the Criminal Investigations Division and served as Staff Director for the Chief of Police under former Chief Val Demings.

In addition to his regular job assignments, Chief Mina served as a member of the SWAT Team for 17 years and was the Team Commander.  Most recently, he served as the Bureau Commander for the Patrol Services Bureau, the largest section of OPD comprised of 392 sworn and civilian personnel.

Chief Mina is a graduate of the 254th Session of the FBI National Academy and has also completed the Southern Police Institute Command Officer’s Development Course.  Chief Mina is currently working on a Master of Science in Criminal Justice from Columbia College.

“I am confident that under Chief Mina’s strong, capable leadership, the Orlando Police Department will continue to work diligently in protecting our community against crime while utilizing proven practices and developing proactive, innovative approaches to meet the growing and changing needs of our City,” said Mayor Dyer.  “Chief Mina has grown through the ranks of OPD over the last 23 years and remains committed to ensuring safety is a top priority for the City of Orlando.”

The appointment of Chief Mina will go before the Orlando City Council on February 24, 2014 for confirmation.