The space will be housed in the UCF’s Center For Emerging Media located at 500 W Livingston St [GMap] in Creative Village.

Tenants will also be able to use the center’s audio, motion capture and film studios.

Companies and individuals will be picked using an application process. Companies will be allowed to stay at Venture Lab for up to a year.

The space is scheduled to open this fall.

This is the third start-up space being planned in Downtown Orlando.

Here’s a look at the floor plan and the complete press release for the new space: 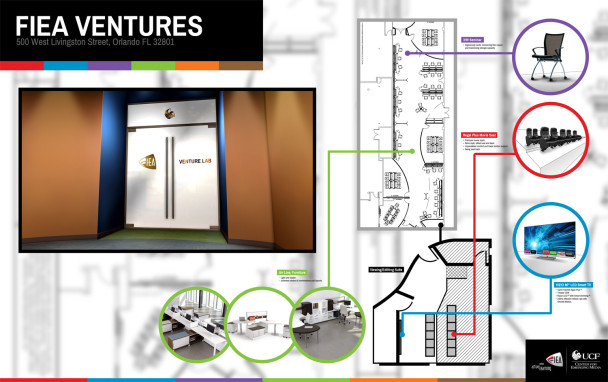 The new FIEA Ventures program will initially be available to academy alumni and will be housed at UCF’s Center For Emerging Media in downtown Orlando. It is expected that some of the first clients to come into FIEA Ventures will be working on video games, animated film, simulation and mobile and web products.

Scheduled to open this fall, the 5,000-square-foot space will provide office and meeting space, a 20-seat theater, mentorships, equipment, and access to technology and expertise. Tenants will also have access to the center’s audio, motion capture and film studios, collectively called Studio 500, all located at 500 W. Livingston St. in downtown Orlando.

Companies and individuals will be picked using an application process in which clients will be asked to detail their concept, technology needs, potential staffing, market prospects and business plan. If accepted, the applicant can stay in FIEA Ventures for up to one year.

Clients will also have access to the center’s faculty and staff, who will help with development and access to industry partners.

“As the No.2 ranked graduate school for game development, FIEA is an anchor for the Creative Village,” said Orlando Mayor Buddy Dyer. “Now, with the launch of FIEA Ventures, the University of Central Florida is taking an innovative approach to ensure its talented alumni become Orlando’s next generation of successful tech entrepreneurs.”

FIEA Ventures is a part of UCF’s Office of Research and Commercialization, which supports economic growth by being a liaison between UCF and local and national economic-development partners.

Other partnerships include UCF’s Business Incubation Program, which has grown into one of the biggest and best in the world; the UCF Venture lab, where technology entrepreneurs transform ideas and intellectual property into business plans; The GrowFL program that serves second-stage companies, and the Blackstone LaunchPad, which focuses on student entrepreneurs.

“This innovative facility will boost both UCF’s presence downtown and Orlando’s vision of a Creative Village in the city’s core,” said Tom O’Neal, UCF’s associate vice president for Research and Commercialization and director of the UCF Business Incubation Program. “This partnership will be an incubator of ideas and commerce to benefit both the university and the community.”