The City of Orlando plans to close South Orange Avenue between Anderson St and South St from July 19 to August, 10 [GMap].

This is the stretch of road in-between the new Dr. Phillips Performing Arts Center and City Commons Plaza near City Hall.

The right turn lane on eastbound South St onto southbound Orange Ave (coming from Boone Ave) will also be closed.

Detours will be posted and include taking Central Ave or South St to Division Ave and then back Orange Ave on either Anderson St or Gore St.

The road closure is to allow the City to make improvements to Orange Ave to coincide with the opening of the Dr Phillips Center and the CNL Arts Plaza. The goal is to create a seamless transition between CNL Arts Plaza and City Commons Plaza.

The specific improvements to this part of Orange Ave include:

The other enhancements to the area include improvements to City Commons Plaza most of which we’ve reported on in the past. Those include:

In addition to the full road closure, there will be rotating lane closures as they make the improvements to the area around the Dr. Phillips Center and City Commons Plaza.

All of the work is scheduled to be completed by November in time for the opening of the Dr. Phillips Center.

Here’s a look at the posted detours and the City Commons Plaza plan (click for larger image): 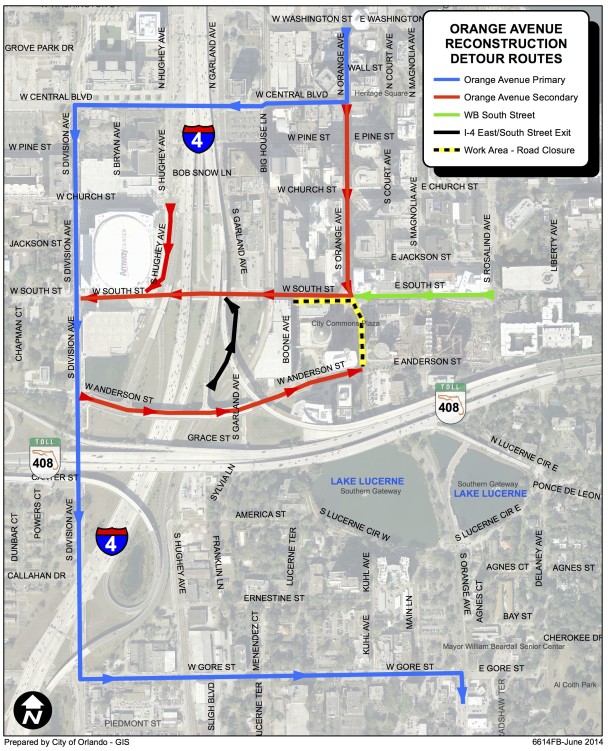