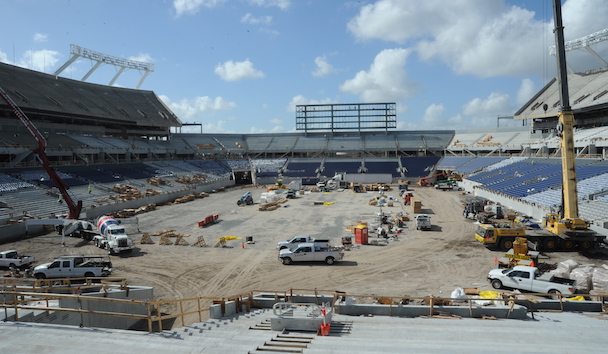 We’ve been telling you about the reconstruction of the Florida Citrus Bowl set to open later this year.

An eagle-eyed reader noticed that the City of Orlando is calling it the Orlando Citrus Bowl on the City’s website.

We did a quick look internet search and it was clear that the City had updated their website but that everyone else was still calling it the Florida Citrus Bowl.

We reached out to a spokesperson at the City of Orlando who informed us that the name did change from the Florida Citrus Bowl to Orlando Citrus Bowl.

They started calling it the Orlando Citrus Bowl last January. At the time they launched a new logo for the stadium and updated the Orlando Venues website.

Here’s what Cassandra Lafser a spokesperson for the City of Orlando told Bungalower:

The stadium had been known as the Florida Citrus Bowl since 1983. The renaming coincided with the $207 million reconstruction project kick-off because we’re ushering in a new era for the stadium and felt it was the appropriate time to focus the spotlight on the thriving Central Florida community that surrounds it. Placing Orlando in the title enhances the tourism and travel destination appeal of this city. The name change also implies the magnitude of the reconstruction: 80% of the stadium will be new.

There has been talk of removing Citrus from the name because the Citrus Commission has not been a sponsor since 2002. That, however, has not happened.

Do you have a question for Ask Bungalower, let us know.