Developers are looking at building a mixed-use project in Ivanhoe Village along Virginia Drive and Alden Road [GMap of property boundary].

Local developer Chance Gordy with Real Estate Inverlad Development LLC told Bungalower that they are working with the community on the plan before submitting for approvals from the city.

“We’re trying to incorporate a lot of the concerns of the neighborhood,” he said.

The property is on the western side of the Lake Formosa Neighborhood and is currently home to a variety of business, warehouses and artist studios. It’s currently owned by R-Kid Properties.

Gordy says his hope is to “retain as much of the creative culture as possible.” He says that includes adding in loft space for artists and ensuring that places like The Venue still have a home there.

Gordy met with residents earlier this week and shared some initial concepts and says they are already in the process of making changes based on the feedback.

Some of the key components to the development (starting at Virginia Drive and heading north):

Currently, the concept shows Alden Road being removed and turned into the pedestrian plaza.

Because the developer is still working with the community to get feedback, an exact timeline hasn’t been set, nor specific phasing. However, Gordy says they hope to break ground within a year.

Here’s a look at the current conceptual renderings and conceptual site plan that the community was asked for input on and are being worked on by the development team:

Correction October 27, 2014: An earlier version of this story incorrectly identified the development as Ivanhoe Place. The development is being called The Yard. 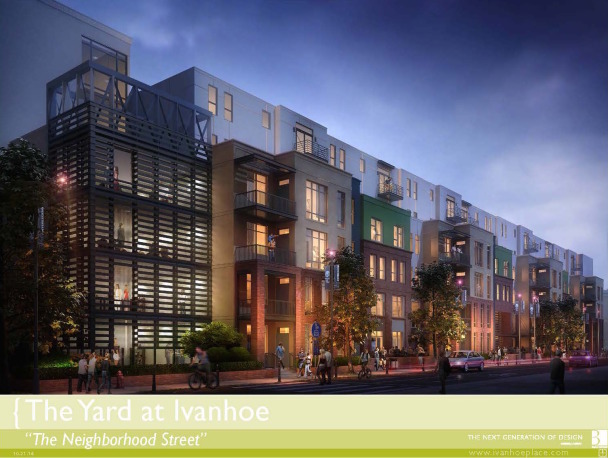