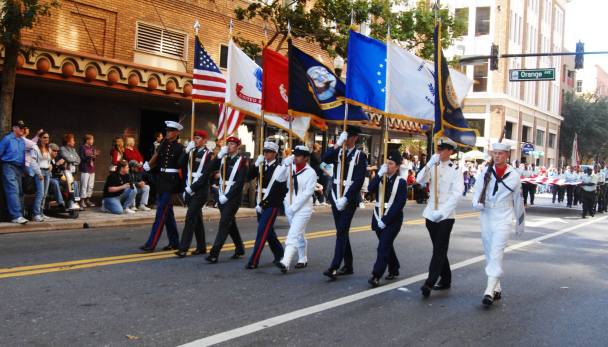 Multiple large events this weekend means it might be a little difficult to get around and find a parking spot downtown. Especially on Saturday.

We’ve already told you about the Dr. Phillips Center grand opening events, but there will also be a Veterans Day Parade, Solar Bears game and the Electric Daisy Carnival. Not to mention the regular events that are always happening on a Saturday downtown.

The City has put together a map along with information on where to park for each of the events and the road closures the events will cause:

Additional closures along the parade route will run from10 a.m. – 3 p.m.Parade route closures will be Central Boulevard between Garland Avenue and Lake Avenue, Rosalind Avenue from South Street to Livingston Street and numerous intersecting side streets.

Patrons can utilize the following garages in conjunction with the free LYMMO bus service for easy access to the event:

Road Closure:
Orange Avenue will be closed between South Street and Anderson Street from10 a.m. – midnight.

The parking garages most convenient for Solar Bears fans are:

A detailed map of the road closures and recommended routes can be found oncityoforlando.net/parking.

Electric Daisy Carnival (EDC) Orlando
Patrons are encouraged to use the following parking lots and then utilize the free Grapefruit LYMMO Line with locations at the Amway Center and Wells’ Built Museum:

The Grapefruit LYMMO Line route will be expanded to provide service at the Florida Citrus Bowl for EDC from 12 p.m. to 12 a.m. on November 7 and 8.