Editor’s note: This is the second post in a series counting down to 2015.

This year was a big year for transportation in Orlando. Here’s a recap of new services and infrastructure available in the downtown Orlando area. SunRail opened for service on May 1, 2014.  In its opening week, when service was free, 10,000 people a day were riding the train. As projected ridership has settled to 3,000-4,000 people a month. The service was added to Google Maps Transit options and a local company created an unofficial iPhone app to track the schedule. A local petition for late night service that began in July was answered this month with an additional late-night round-trip. A week after the night train was announced, Orlando Venues and Florida Citrus Sports announced that they would sponsor free but limited service on New Year’s Day 2015. Read more about SunRail here>>

This summer saw the introduction of Uber and Lyft in Orlando. While both operating illegally, the app-based ridesharing services became popular options for residents and visitors. In November, the City of Orlando drafted an amendment to the vehicle-for-hire ordinance that would allow transportation networking companies like Uber andLyft to operate legally as livery vehicles. After much public feedback on the first reading of the amendment, changes were made to make the ordinance fair for all vehicle-for-hire categories. Read more about ridesharing services Uber and Lyft here >> Earlier this month the City of Orlando began replacing all 1,100 parking meters in Downtown Orlando with smart meters. The meters can currently accept credit cards and coins. Once all of the smart meters are in, the city will install sensors at each parking spot that can determine if a vehicle is parked there. After these installations are complete, users will be able to use two new parking apps. One can be used to find available spots, another will be available to pay for parking. Read more about the smart meters here >> 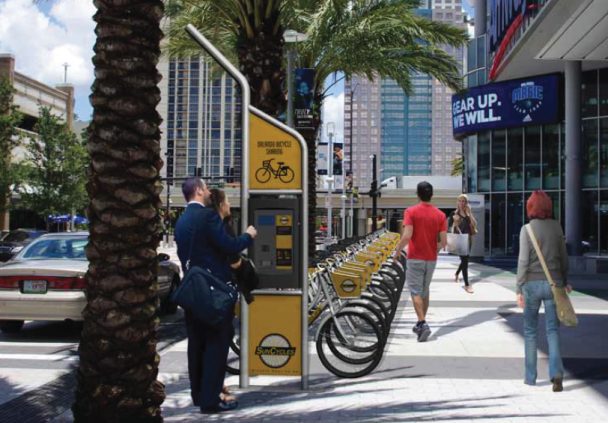 After several delays, Orlando’s bike sharing system has taken a significant step toward launching. CycleHop, the owner and operator of the system was awarded the contract for bike sharing in Orlando in 2013. This month, stations were installed and memberships should be available online by December 31. Current plans for the system include 20 station locations around downtown Orlando. A ribbon cutting for the system is planned for January 9, 2015 at 2pm at OUC’s bike share station. Read more about Orlando Bike Share here >>