Did You Know-town is a series of hyper-local trivia bits about the City Beautiful.

Mr. Joseph Bumby was one of Orlando’s best-loved pioneers and many of the city’s buildings and even a street bare his name.

Joseph Bumby married the love of his life, Mary Flowers Elderkin at “high noon” in 1867 in Waterloo UK, then promptly left for America in 1873. It took Bumby two weeks to cross the Atlantic on a fancy (for the times) steamboat, to Jacksonville, via Nova Scotia, and a ferryboat ride up the St. John’s River.

He, his wife, and their nine children were one of the first families in the Orlando area. Bumby’s homestead of 160 acres stretched from Summerlin to the Executive airport. While his orange trees matured, Bumby delivered mail between Orlando and Mellonville (now Sanford), and then opened the first hardware store, over on Church Street in 1886 – which now houses Hamburger Mary’s (Facebook | Website).

Joseph Bumby was an active member of the community as an elder trustee of the First Presbyterian Church, the Rotary Club as well as a member of the Olivet Commandery no. 4 of the Knights Templar.

When he died the Hardware store was passed on to his six sons, the “Bumby Boys” and it stayed in business until 1966, when it closed its doors after 80 years of operation. 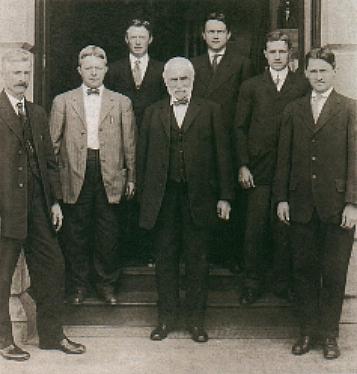 Sponsored This is Halloween by CFCArts

Presented by the CFCArts Symphony Orchestra Join the CFCArts Symphony Orchestra for a concert that will enchant you and your family with a spooky and fun evening full of the greatest hits of Halloween. Please take a moment to review the CFCArts Organization-Wide Health & Safety Guidelines Please note:
•To park at Mead Garden, one parking pass per vehicle must be purchased in advance and shown upon arrival.
•For this outdoor concert, chairs will not be available. Please plan ahead to bring folding chairs and blanketsfor your party to get comfortable and enjoy the atmosphere at the beautiful Mead Garden.

TPD’s Putt N’ Pour is part Pub Crawl, part Miniature Golf and all fun! Golfers will be challenged by holes designed and built by Thornton Park District bars and restaurants while enjoying drink specials and prize giveaways. After the crawl, golfers and spectators converge at the Osceola Circle for the official post party complete with DJ, drink specials & raffles!

Orange County boasts a long, rich history, beginning even before Florida became a state. Join us as we celebrate the day 175 years ago that changed Central Florida forever – when Mosquito County dropped its pesky name and officially became Orange County. We’ll sip Florida’s own homegrown kind of tea, eat citrus-inspired treats, and enjoy lots of fun activities for families. Note: Activity supplies are available on a first-come, first-served basis.

A group of 26 African Americans found success as artists in the segregated South of the 1950s. Meet a group of these remarkable artists and hear their stories on Sunday, December 8 from 10 a.m. – 4 p.m. You’ll have an opportunity to purchase their uniquely Florida artwork. Free admission. Call 407-836-8594 for more details.

Join us at the annual Holiday Market in the Hourglass District!  This year’s market will feature vintage and handmade items that will make the perfect gifts this season.  Food, drinks and live music while you shop!

Join The Rotary Club of Orlando for the 2019 Downtown Orlando Christmas Parade and Family Fun Fair! Festivities from 2pm – 6pm! Please join us by participating in the parade, volunteering to help, or becoming a co-sponsor. No matter how big or small, your part in this parade will be memorable and give you a real sense of accomplishment and service to your community. Proceeds to benefit The Salvation Army’s Angel Tree Program.

Be part of something special. Be part of the Rotary of Orlando Christmas Parade. Remember, Santa is watching……