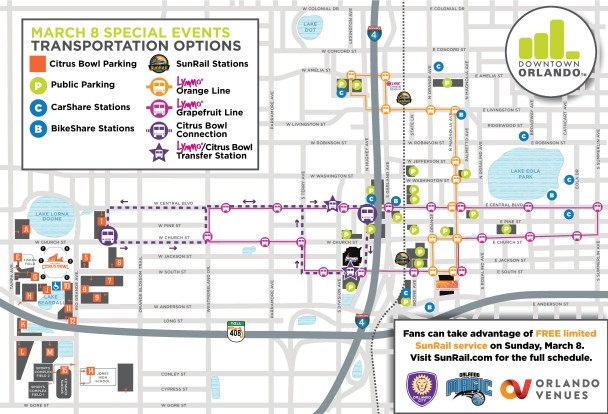 City of Orlando has released some transportation tips in order to make your first Orlando City Soccer game a little less stressful for those of you who were planning to take advantage of the free weekend service on the day of the game (we wrote about that HERE) you may have wondered how you would get to the stadium from the Church Street SunRail station [Gmap].

The City of Orlando is preparing to welcome thousands of patrons to Downtown Orlando on Sunday, March 8, as the Orlando Magic host the Boston Celtics, Orlando City Soccer plays its first-ever Major League Soccer match and the Orlando Ballet perform at the Dr. Phillips Center for Performing Arts.
TRANSPORTATION OPTIONS AND PARKING:
SunRail
SunRail will offer free, limited service on Sunday, March 8, providing attendees with a hassle-free travel alternative to get Downtown.  For schedule information, please visit Sunrail.com.
LYMMO
Once attendees have arrived Downtown, the City also offers convenient and free transportation on the LYMMO Orange and Grapefruit lines.
Orlando Citrus Bowl Shuttle
Beginning at 1 p.m., a free shuttle will be available to transport fans to the Orlando Citrus Bowl Stadium. Pick up locations include:
Parking
Due to the large number of attendees expected in Downtown Orlando, attendees are encouraged to pre-pay for parking by visiting orlandoeventparking.com.