In January we told you about the City accepting proposals for a hotel next to the Dr. Phillips Center.

In the window to accept proposals for a hotel, the City received one response from a group called Downtown Orlando Developments (DOD).

According to the proposal, the first floor of the hotel will be lined with colonnades along South Street and Seneff Arts Plaza. Each room will have an outdoor balcony and a rooftop bar will overlook Seneff Arts Plaza. A chef-driven restaurant will open outward, and spill out onto the covered colonnade space. DOD has also committed to designing and building a hotel that matched the “trendsetting architecture of the Dr. Phillips Center.”

Inside the proposed hotel, DOD proposes 380 sq ft. rooms on levels 5 -8 of the hotel. The pictures provided in the proposal look like stock photos from other projects, but the proposal did mention the bathrooms would feature rain showers. You can see the proposed configuration of the rooms below. There will also be large suites on each floor.

Two ballrooms on the 4th floor will be available for corporate and large-scale personal events like weddings. An infinity pool is also featured on this amenity level. The hotel’s proposed 3,000 SF kitchen will be able to cater events for up to 1000 people. In answering a question from the RFP about catering the Center for the Performing Arts, DOD responded with this:

DOD with work with DPAC staff and the City of Orlando to determine the best methodology to deliver food service to theater patrons such as underground passages and above ground paths that would be protected from the elements.

The proposal also mentions free WiFi and free Starbucks coffee bars inside the hotel. The Dr. Phillips Center currently has a partnership with Barnies Coffee in the Performing Arts Center.

The eighth floor will include an AVEDA Spa and fitness center. There will also be access to private terraces overlooking South Street.

The group reports that they are in the final phases of securing the HILTON Curio brand for the Hotel. The brand would help the hotel achieve a minimum rating of 4-diamonds. Hilton’s “HHonors” program might also attract business travelers.

The second and third floors of the building will house a garage with 214 parking spots for valet or self-park. For LEED Certification, the proposal also promises charging stations for electric vehicles as well as bike racks.

The DOD team is made up of established hospitality players, like Downtown Orlando’s Stuart Newmark. Newmark is both President & Chief Operating Officer for Aloft Orlando. He was also General Manager for the Grand Bohemian Hotel from its opening, through 2005. Outside of his professional careers, Newmark has had substantial influence in shaping Downtown Orlando with a multi-year appointment as Vice Chair for the City of Orlando Downtown Development Board and also sat Mayor Buddy Dyer’s Downtown Strategic Transition Team in 2003 and Project DTO in 2014.

The proposal includes options for a 99+ year lease of the hotel-site for $315,000 a year (with increases according to the Consumer Price Index for Orlando every five years) or a $5,000,000 purchase. DOD is also offering a $1,000,000 performance guarantee in favor of the City.

Representatives from the City of Orlando and Dr. Phillips Performing Arts Center will sit on the selection committee for this project and will make recommendations to the City Council about moving forward with this proposal from DOD.

Just a reminder, this is the selection criteria:

The criteria used in the evaluation of proposals shall include:
1. Quality of design, architecture, and building materials.
2. Accomplishment of the project goals and project scope set forth.
3. Ability of design to take advantage of the adjacent Arts Center and Seneff Arts Plaza
4. Demonstration of a proven track record in completing similar development projects in a timely manner.
5. Demonstration of financial ability to undertake and timely complete the project.
6. Proposed rent/lease terms or purchase price that will provide a sufficient stream of income to help support the ongoing operation and maintenance of the Arts Center. 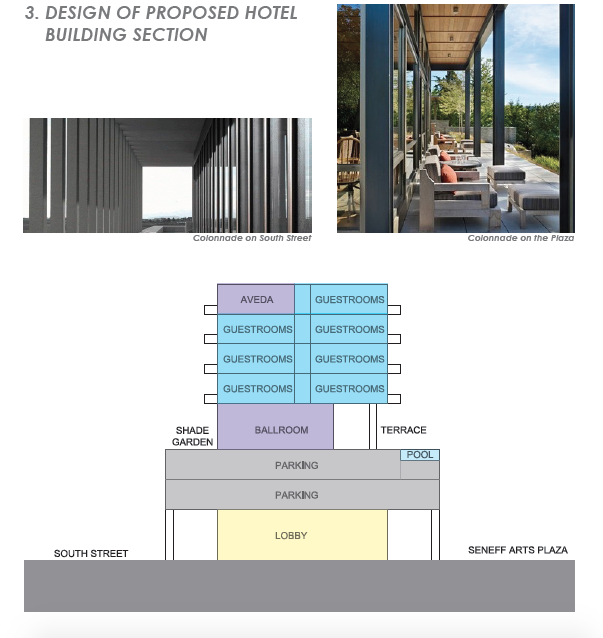