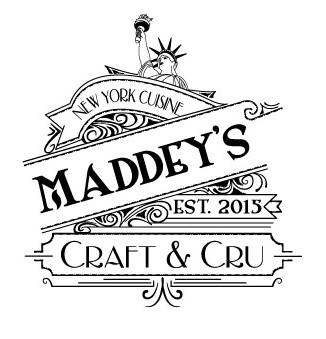 A lot of people have been talking about Maddey’s Craft & Cru (Facebook | Website) lately, but what we’ve heard only seems to bring up more questions. Apparently our readers think the same thing.

“Hey Bungalower! How come you haven’t talked about Maddey’s Craft & Cru yet? Everyone else has!
It sounds like it’s going to be a great restaurant, but I don’t understand where it’s opening.”

The short answer to that is, we’ve been trying to find out a little more details before writing about it ourselves.

The new restaurant’s website describes the menu as “local, seasonal, made by hand, food from the earth and made with love” with a New York twist.

Other media sources like the Orlando Sentinel, described it as an “Italian-inspired American bistro” with fresh pastas and artisan pizzas. The restaurant’s Instagram and Facebook is full of photos of decadent dishes … but nobody seems to know exactly where the shop will be opening.

The restaurant had a tent at Ivanhoe Village’s Virginia Drive Live event and apparently told other vendors they would be located in Mills 50. However, our friends over at the Orlando Sentinel and the Orlando Weekly reported that they were opening downtown. We also couldn’t find any permits or information on the restaurant at City hall.

We spoke with the owner, Jason Schofield, and he helped shed some light on the situation.

Due to the lack of space, Schofield will be looking at hosting a number of pop-up dinners at spaces like East End Market and Quantum Leap until he has found a home for his Maddey’s Craft & Cru concept.

So there you go, Bungalowers.

If you have any burning questions you’d like to ask, don’t hesitate to reach out! We love being nosey for you.