In January, a nonprofit organization called SELF was launched, with the help of the City of Orlando, to aid in retrofitting local homes to be more energy efficient.

Bungalower was invited to a home on Bumby Avenue to meet a couple that was participating in a low-interest loan program to increase their energy efficiency, more specifically, they are taking part in the relatively new Solar Energy Loan Fund or SELF (Website) and the OUC’s Efficiency Delivered Program (Website).

Bungalower managed to be present when the roof was in the middle of being replaced, financed by a three-year program that funded a peal and stick layer of waterproofing. According to the homeowners, it was a better rate compared to a regular bank and it lowered their home owner’s insurance due to increased wind resistance.

The process to make their home more energy efficient started in April with a basic energy audit, where experts came to see what the house’s weaknesses were – drafts, lack of insulation, single pane windows, etc.

The windows were replaced in July, and the owners were already seeing a marked improvement in their bill. They were watching their live-streaming kilo watt usage every day to see how low they could keep their consumption.

The roof cost $6,900 through the SELF program, and they also purchased new insulation through the OUC Efficiency Delivered Program, a 30 percent savings versus retail price for the same project.

OUC can subsidize or reduce their interest rates based on the income of the applicant, and if you make under $40,000 you can get 80% of the cost financed. 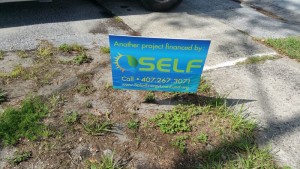