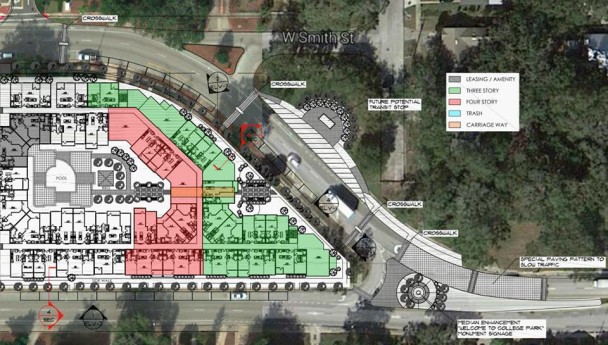 The grassroots opposition group, Rethink the Princeton (Facebook), has ceased its legal fight against Pollack Shores, the developer behind the proposed Princeton at College Park project.

According to the group, the City and Pollack shores threatened to sue them if they did not drop their legal appeal to change the project’s scale. Click HERE to see a letter they sent the Orlando Weekly detailing their decision to give up.

“Pollack Shores Real Estate Group is excited to announce the upscale multifamily development, the Princeton at College Park, will come to fruition in Orlando, Fla.

The National Association of Home Builders Multifamily Development Firm of the Year, Pollack Shores, worked collaboratively with hundreds of residents of the College Park neighborhood throughout the development process by hosting four public meetings and more than 50 private meetings with residents, business owners, the City Architect and staff, the municipal planning board and the City Commission which resulted in a reduction of project density by 25 percent.

We are very excited to create the Princeton at College Park which will allow future residents the opportunity to be a part of the desirable College Park neighborhood. We are dedicated to the city of Orlando and its responsible growth by adhering to the Edgewater Vision plan and we will continue to be good neighbors in the College Park area and the greater City of Orlando, “ says Anthony Everett, Director of Central Florida for Pollack Shores.

The Princeton at College Park development, bound by Smith Street, Princeton Street and Edgewater Drive, will be home to 206 luxury units and a parking garage. The project will contribute more than $1.2 million in transportation improvements, public parking, undergrounding of overhead power lines, sewer upgrades, a public pocket park and a potential future transit stop. The project will add 300 new construction jobs, 10 full-time management positions and contribute about $38 million to the Orlando economy.”

We reached out to the Mayor’s office in regards to the claims being made that the City had “threatened to sue” Rethink the Princeton members and received the following response:

“Our responsibility is to protect tax payer resources and because of that, the City informed Rethink the Princeton of plans to file a motion for repayment of attorney fees and costs in the event that we [the City of Orlando] prevailed. If they prevailed [won the case] these costs would not be their burden. The Rethink the Princeton group chose to dismiss their claim.
Legal fees are not out of the ordinary in court cases. The ReThink Princeton group should have continued their litigation if they believed they would be successful.
For background, on September 10, 2015, a three-judge panel of the Ninth Judicial Circuit rejected the challengers’ claims outright in Popkins v. City of Orlando.  The panel found that the City respected petitioners’ due process rights during the rezoning process, complied with the Edgewater Drive Special Plan and the Land Development Code, and was fully supported by the evidence in approving the Princeton project.
The court in a related action, Rethink the Princeton, Inc. v. City of Orlando, has also recently rejected a number of the plaintiffs’ claims.  The only claims that remained related to The Princeton’s consistency with the City’s Growth Management Plan. The City remained committed to defending the City Council’s zoning decision and the public process established for developing and implementing smart growth management strategies. “

To read the report from the Edgewater Drive Vision Taskforce mentioned above for yourself, click HERE.