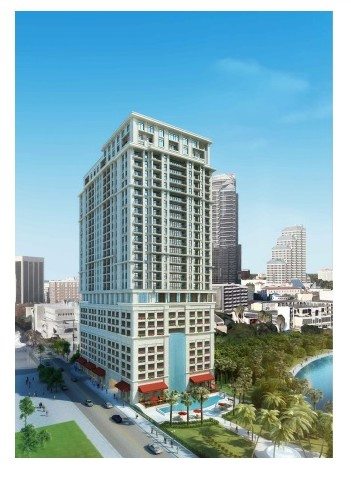 Cathedral Church of St. Luke dropped its appeal against the City Centre development proposed for the southwest corner of Lake Eola Park on Friday, December 4.

The 28-story tower was approved by the City’s Municipal Planning Board back in July, which we wrote about HERE. The developer had proposed to build a cafe space on the eastern side of their tower that would have intruded into the park much like the patio at the new downtown World of Beer location. They also offered to add a number of improvements to that corner of the park.

The Cathedral Church of St. Luke had deeded the land needed to create Lake Eola Park to the City in 1914, with the added provision that the park never be developed on and kept as a green space for Orlando residents to use and enjoy. The Cathedral filed an appeal to the City against the proposed building when it was approved by the Planning Board but recently reached an agreement with the developer and have dropped their case. The City and the developer have agreed not to build on any land that had previously been donated by the church.

The developer had stated previously in earlier interviews that if they would most likely be dropping the outdoor cafe space if opposition continued. Now, rather than a cafe, the tower will house a pharmacy instead. The name of the pharmacy chain to occupy the space has yet to be released.

The project must still be approved by City Council and and receive the consequent zoning changes needed to make the tower a reality. Other appeals against the tower were dismissed in September.