As of 10 a.m. Tuesday, February 17, the Florida House of Representatives has approved a bill to strip cities and counties of their ability to regulate polystyrene foam foodware, essentially roadblocking our locally grown No Foam Zone movement.

Polystyrene (or Styrofoam) is commonly used for disposable food containers, ice chests, and for packing materials. It is not biodegradable and because of this it is becoming a growing concern for environmentalists and anti-litter advocates.

Several municipalities have started to address the issue by adopting ordinances to prohibit the use of polystyrene on a local level. There are more than 100 municipalities across the country that currently have polystyrene ordinances; including Washington, D.C. and San Francisco. Florida cities with a ban include; Bal Harbor, Miami Beach, Surfside, and Key Biscayne.

The preemption passed as part of CS/CS/HB 7007, (an agricultural bill dealing mostly with fertilizer regulations) is meant to prohibit local governments from regulating the use of polystyrene despite Florida’s status as a “Home Rule” state. The preemption does not apply to ordinances adopted prior to this year. 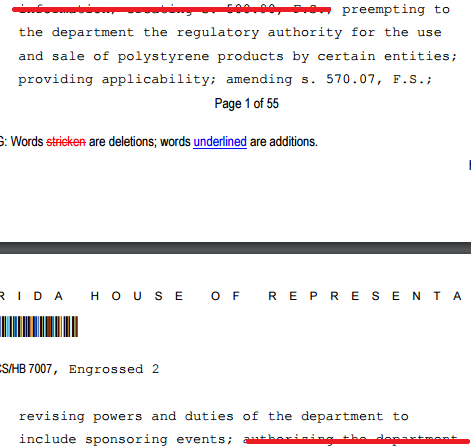 HB 7007 was amended at the end of January to include the preemption against polystyrene regulation.

We are currently waiting for a statement from the Mayor’s office about how this will affect the City’s expected ban on Polystyrene products.

Click the link below for a video by VolunteerCleanup.org featuring Florida House Representative David Richardson discussing the Styrofoam issue.

Florida legislators moving to block local Styrofoam regulationsQuick Action Needed – Publix has lobbied some of our state elected officials to prevent local communities from regulating the use of styrofoam. Please WATCH and SHARE this video of our devastating styrofoam problem and CALL your state senator to ask them to please vote NO on a statewide styrofoam preemption. https://www.flsenate.gov/senators/find

Posted by VolunteerCleanup.Org on Monday, February 15, 2016