The Florida Department of Transportation (FDOT) has been carrying out a Planning Study on the Robinson Street Corridor between Hughey Avenue and Maguire Boulevard, in partnership with the City of Orlando. According to their site, “Its goal is to identify and objectively evaluate a full range of possible improvements to address multi-modal safety and mobility along the corridor. ”

We wrote about the study back in July, 2015 HERE , seeing it as the first step towards manifesting the Project DTO mission to make Robinson a more pedestrian-friendly, two-lane street.

Robinson Street has been an important City roadway since 1890 when it was a dirt road through orchards and forest. It transitioned to a two-lane paved road with on-street parking in 1960s during which it was quickly made into a four-lane road. It’s always been seen as a “gateway street” to Downtown Orlando and major East/West Corridor in the City.

The most consistent finding in the data collection phase of the study was that Orlando residents want improved pedestrian safety and comfort considered in any changes made to the Robinson Street corridor. FDOT’s studies, as stated in the video below, showed that there were many pedestrian challenges resulting from poor maintenance and that some sidewalks were placed too close to narrow travel lanes, making pedestrians feel unsafe.

Robinson Street is currently not a designated part of the official Orlando’s Bicycling Network, and has no identified bike lanes. Coupled with the narrow 10′ travel lanes and City buses, Robinson is not safe for commuters on bicycle. 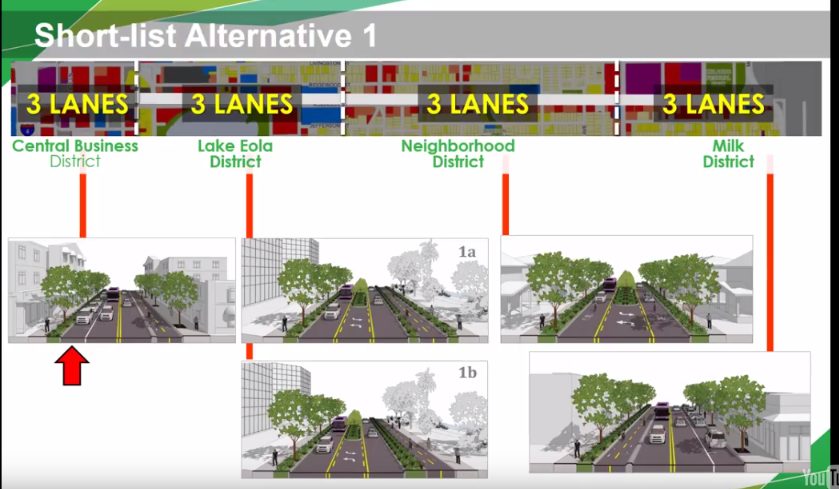 Alternative 1: Reconfigure the street to include three travel lanes with one lane in each direction and a center left-turning lane with spot medians throughout. Some on-street parking would be added in the Central Business District and the Milk District. Bicycling would be acknowledged with sharrows in the Neighborhood District (Bumby to Mills). A protected two-way bicycle track would be included in the CBD, along Lake Eola, and in the Milk District. Alternative 2: Reconfigure the street to include three travel lanes between Hughey Avenue and Hyer Avenue in the CBD and along Lake Eola, but continue as four lanes through the residential neighborhoods and into the Milk District. This alternative would have less cycling infrastructure and emphasize sharrows throughout the corridor, rather than protected bike lanes in favor of wider shared-use paths replacing the sidewalks in some segments, and more on-street parking near Lake Eola and businesses along Robinson.

According to the City’s initial evaluation, Alternative 1 is more costly, but meets more of the needs presented by the studies. The reason Alternative 1 did not score higher on Need 7 is due to the number of cars it would divert to surrounding streets if lanes are taken away.

Watch the Public Meeting Presentation Video below for more information or click HERE to see to all project documents that are available at this time: