Here is a look at some of the best events taking place this weekend.
Visit the complete events calendar by clicking on “Events” in our main menu.

If you’d like to have your event added to our calendar, simply send a link to your Facebook event page to [email protected] It’s that easy! It’s also the reason why we have one of the most comprehensive event calendars in Central Florida.

Be sure to tag us in your Instagram photos, @orlandobungalower, so we can see how much fun you’re having. Get your piece of history by reserving your spot at the Fan Forum at Wall Street Plaza. The new 2017 Home Kit will be on sale for the first time to the general public. LionNation members will get exclusive pre-sale access beginning at 5:00 PM. The store will be open to the general public starting at 6:00 PM. Enjoy $3 Heineken’s throughout the event as well. VIRUNGA is Africa’s oldest National Park, one of the most bio-diverse places in the world, and home to the last of the mountain gorillas. It is also the most dangerous park to protect as over 140 rangers have lost their lives. Join us on starting Friday, February 17th starting at 6p for our Four Year Anniversary Weekend Celebration! We will be featuring some amazing beer releases and live music all weekend long! Come celebrate four years of success with us-we couldn’t have done it without you! Stay tuned for more details! Friday, February 17th 8p 80’s Night hosted by Barrel of Monks Brewing Live music and all your favorite Barrel of Monks brews on tap. Looking for a fun and memorable way to make an impact in Central Florida? The Fourth Annual Quack Attack on Poverty 5k presented by The Orlando Solar Bears fits the bill! On Saturday, February 18, you are invited to join friends and neighbors to run, jog, stroll or roll 3.1 miles…all while wearing an inflatable duck-shaped pool float around your waist. Explore beautiful homes that range from mid century modern to quirky retro to stylishly modern. Then retreat to our after party for mid century modern themed light bites, wine and, for a separate donation, classic mixed drinks. Homes are currently being sought for this chic and stylish event so if you are interested, please send an email to [email protected] Also, a sponsorship packet is being developed right now and will be available soon. Check back often for updates. Join the Bach Festival Society and Cask & Larder for the release of a limited-edition beer, the 2017 Brandenburger Bock, brewed to commemorate the 82nd Annual Bach Festival in Winter Park. The event, held at Cask & Larder Brewery‘s sister restruant, The Ravenous Pig will also feature live performances. The 2017 Branderburger Bock, brewed by Cask & Larder head brewer Larry Foor, will be produced in a style that mimics the methods of brewing in Germany during the 18th century. Bikes you say? Brews you say? Sign us up! Retro City Cycles is excited to announce our participation in the Goose Island Bikes, Bites, and Brews! Registration starts at 1 pm at Retro! Pedals down at 1:45 pm. A beer and a “bite” will be available for purchase at each of the following stops: Outpost Neighborhood Kitchen The Brass Tap Hammered Lamb. Harry Potter and the Sorcerer’s Stone In Concert with the Orlando Philharmonic Orchestra Show date: Saturday – Sunday, Feb. 18 – 19, 2017 Show times vary Tickets start at $45.00 Walt Disney Theater The Harry Potter film series is one of those once-in-a-lifetime cultural phenomena that continues to delight millions of fans around the world. This concert will feature the Orlando Philharmonic Orchestra performing every note from Harry Potter and the Sorcerer’s Stone. Orlando Mayor Buddy Dyer invites Central Florida residents and visitors to the 11th annual Blues B-Q in Downtown Orlando this Saturday, February 18, 2017. This free event features performances by award-winning musicians, as well as the opportunity to purchase some of Orlando’s best barbecue.  This year’s Blues B-Q musicians include The Fabulous Thunderbirds, known for their hit song “Tuff Enuff.” Also performing on the main stage will be Robert Randolph and the Family Band and Three Forks Road.

Janine Klein is The Diva’s Diva 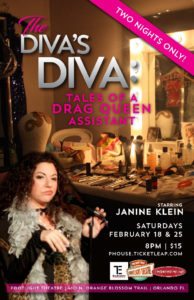 Janine returns to The P House  with “Janine Klein The Diva’s Diva, Tales of a Drag Queen Assistant”. Her hilarious tale of a tour from Dublin to Peoria with her famous drag-queen BFF–Ginger Minj of RuPaul’s Drag Race fame. Often called Orlando’s favorite Jewish diva, Janine has performed at the Duplex, The Laurie Beechman in New York City as well as Mad Cow Cabaret Fest, Orlando Shakespeare Festival, and  has recently returned from Edinburgh Fringe Festival in “Joe’s NYC Bar” Come visit us at Casa Feliz in Winter Park this Sunday February 19th from noon-3pm! There will be music in the Main House and we will be serving two new delicious coffees in the Carriage House. We’ll also have our fresh roasted whole bean coffee for sale and you’ll receive a free cup of coffee with your purchase! Get your craft coffee fix this Sunday with us at Casa Feliz.

It’s not a wedding show — it’s more. Now in our seventh year, we have hosted a lovely stroll down Park Ave introducing Central Florida Couples to local vendors and venues. Every year, we continue to reimagine and revamp what the stroll could be. This year we will have three central locations, The Alfond Inn, Woman’s Club of Winter Park and 310 Park South.

Spring in the Garden Spring concert in the park featuring the Philharmonia, Prelude, and Overture Strings Orchestras. The Grove features picnic style seating. Please bring lawn chairs and blankets for your family. Limited chair seating is available for those in need. Note: The “Grove at Mead Botanical Garden” is an open air pavilion designed for musical performance, theatrical productions, film viewings and educational programming, located in the heart of the 47-acre public garden in Winter Park. It was constructed for FSYO after a generous…