SPONSORED by lil indies (Facebook): Inhabit is a new series by local photographer David Lawrence (Website), that shares stories about the people who call Orlando home. It’s an exploration of where people live and spend their days, whether that be at home, in an office, the streets of downtown, or anywhere in between. Lawrence explores who people are and how they ended there. 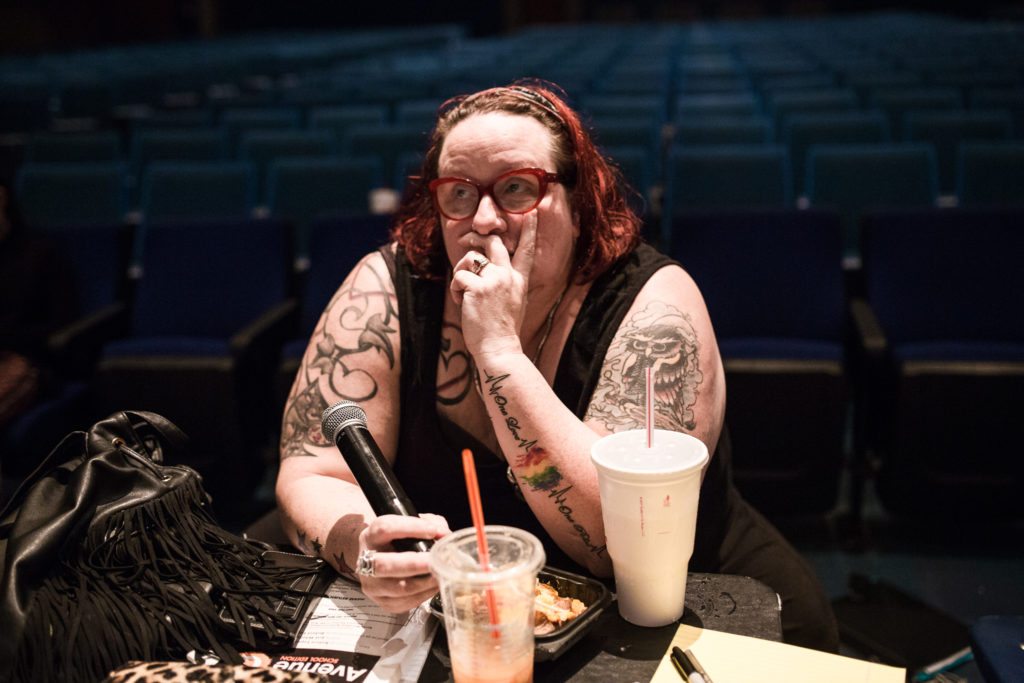 My name is Beth Marshall. I have been in Orlando for 22 years. I’m originally from Paducah, Kentucky. I moved here from Kansas City, Missouri and have lived and toured many places along the way. I’m 46-years old. I’m a theater artist. My whole professional life has been doing nothing but theater. Those hats range from artistic direction to producing the Orlando Fringe Festival for eight years to being involved with it for 19-years in some capacity, to being an actor, director, and an adjudicator on the thespian and state circuit for our high schools in Florida. I also have my production company, Beth Marshall Presents, which is going on 10-years now. I’m married and I have two children.

Can you tell me how Beth Marshall Presents (BMP) began? And did you intend on owning your own company at some point?

I intended on owning my own company ever since I was in school at Stephens College in Columbia Missouri studying theater. I ran and was the artistic director of the Warehouse Theatre there, which was the student-run theater, and knew then that I wanted to be an artistic director at a theater in whatever form it took. Whether that was me being at someone else’s theater, running a non-profit festival like the Fringe, or having my own company. So in 2008 BMP started on a small scale when I was still running the Orlando Fringe. I left the Orlando Fringe at the helm of it in 2011 and went full-time with BMP.

Prior to that I produced for over 20 years, but I just produced under other people’s theatrical companies or under my own name and not my company name. So yeah, I always saw it coming and now we have auditions for our 10th season in three weeks.

Was Fringe what you did full-time?

So it wasn’t like you had your hands in five other things at the time?

No, no. When I was the producing artist director of Fringe, which was from 2004 to 2011, I was full time at the Orlando Fringe. I did other side-jobs, but my full-time salary was there.


Did you help to start the Orlando Fringe?

No, the Orlando Fringe was started in 1992 by three men; Terry Olson, Rick Kuntz, and Andy Anthony. I wasn’t even in town at that time. I came to Orlando at the end of ‘95/’96. ‘97 I was a volunteer at the beer tent for the Orlando Fringe and then I went on to produce, act, and direct my own shows as part of the Fringe once a year. Then I was hired on to be the Associate Kids Fringe producer. From there I was the Associate Producer of the festival and then the Producing Artist Director. I moved the festival from downtown to Loch Haven Park and that’s what a lot of people locally would note was one of my key marks on the festival.

So did you do a lot of fundraising then?

Clearly. *chuckles* My job was a mix of artistic direction and producing the actual festival. At the time we did not have a separate executive director position, which there is now. So I really did everything in the beginning. During my time was when we were able to afford all the positions[that exist currently]. So, when I left we had a general manager and a director of development, which put me out of grant writing and fundraising and fully focused on the artistic part.

Where are we at currently and what is important to you about this space?

This space is one of the many spaces that BMP is at. My company is nomadic. So, what Lake Howell Theatre is for BMP is a partner for the past six years with our annual kick-off event Play in a Day. Play in a Day is an event that brings 150 artists together in the course of a 24-hour period to do a series of ten-minute-long theatrical shorts. They don’t know the theme or have the chance to write about it until the day before the show.

[Beth went on to tell me more about her long time relationship with James Brendlinger, the producer of Penguin Point Productions Costume Shop and the Drama Director at Lake Howell Theatre].

We partnered in 2014 (Penguin Point and I did). We did a piece called “Hoodies” which was the third in a trilogy of the Trayvon Martin Project that we [BMP] had done in my season. This was a piece that we had done [previously] at the Orlando Fringe Festival. Both Penguin Point and BMP worked together to make that happen. James Brendlinger who runs this program [Penguin Point] is one of my best friends. He is the Drama Director of Lake Howell High School and he is the Producer of Penguin Point. He is the state director for Junior Thespians, the district chair for State Thespians, and on the path to becoming the State Director. And his kids—who are these kids that you see in Avenue Q: The School Edition—are trained to be collectively involved with the community in doing give back work through the outreach of their costume shop, prop shop, their set shop. You do a lot of things, but what makes you most excited?

If someone were to put a gun to my head and say that I have to pick one thing to do for the rest of my life in this business, I would be very unhappy. But I would probably choose casting. If I were in a casting room all day long, putting a show together or a team together. And whether that team is ‘let’s get the best team together for the show or let’s get the best team together for the Orlando Fringe festival, or let me hire the best staff, or cast this movie for that’; I love that development. It is definitely among my favorite things. The joy in my life comes from coaching these kids. I could coach full time and make a living from doing that, but for me, I love the variety. I also love touring.


What to you is important about theater and why do you think others should care about it as well?

Theater is an absolute necessity. That’s one sentence. Period. End of it. Its an absolute necessity. Many will say that it’s a ‘dying art form that won’t die’ and I agree to some degree. It’s harder and harder every year to sell theater and physical theaters are constantly battling between the art that they really want to do and the art that will sell the tickets. Lord knows I am. That’s part of the reason why I do not have a physical space. I don’t want to be a landlord because that’s what you have to do if you have a physical plant theater. And no offense to my kids, but I don’t want to do musicals all the time. I like doing gritty social political pieces and gritty social political pieces are great for tax write offs, giving back to the community and to fulfill my soul.

But gritty social political pieces don’t make my living. So that comes in branching out and doing other work and finding that joy and finding that balance without losing the integrity of why I started. So I very much selectively pick one or two pieces a year that I work on that will give me that financial freedom and security to be able to do exactly what I want to do artistically the rest of the year.


You have a partnership with Parliament House.

Yep, yep. We partner there. Our show this season is The Most Fabulous Story Ever Told.


I was fascinated by that because I grew up Southern Baptist and when I read about it, I could only hear my mom saying what she’d always say, ‘I’m surprised God didn’t strike this place with lightning’.  Adult Me really wants to believe God has a sense of humor.


So, I was really curious to hear about the premise of that story, because it is still mirroring the Bible, but it has a comical aspect from what I heard you describe.

For The Most Fabulous Story Ever Told? It’s a comedy and a drama. Its got a mix of both. It’s the story of Adam and Steve and Jane and Mabel instead of Adam and Eve *Chuckles* and Cain and Abel. They are the four central characters. The first half of the show takes place in biblical times and the second half takes place in a New York apartment and it’s the story of their life and their friendship. It’s a gay Christmas carol. That’s what it is.

I know you’re entering into your 10th season, but is there anything in the world of Beth Marshall Presents that we should be on the lookout for in the next couple months?

I’ll be on tour with Save Me, Dolly Parton. And then we will be coming back to kick off the season with Play in a Day. And we are going to have a very fun theme this year. And that will be in the September time frame. Once the 2018 part of the season begins, we are going to be doing Martin McDonagh’s Lieutenant of Inishmore, which is our main stage at The Garden Theatre. It is a bloody Irish tale of almost mafia-type Irish guys in the war that get disgruntled because a guy thinks that his beloved black cat has been bludgeoned. And so they go off to war. If Quentin Tarantino were on the stage, this is what this play is. It’s a very hard play to produce because it has a whole lot of blood, a whole lot of guns, and animals on the stage – cats to be exact.


Which requires a larger budget I’m guessing and more hands.

Yes- It’s a heavy budget and all my shows at The Garden are heavy budgets. For the future, who knows? I haven’t planned my season beyond the 2017-18 season, other than A Play in a Day, that will always be an integral part of it. I’ve been doing Play in a Day in some of capacity or another for 17 years. So it won’t be stopping anytime soon. And touring in the Fringe circuits will not be stopping any time soon. And coaching in the schools will not be stopping anytime either. How partnerships alone in the community can alter all the time and that will also dictate what level and budget of shows I’m doing. I see myself continually producing. It’s just a matter of what I lead with. Whether that is acting, directing, or producing, or coaching.  And that changes and I really do it based on how I’m feeling. There’s no formula more than that. 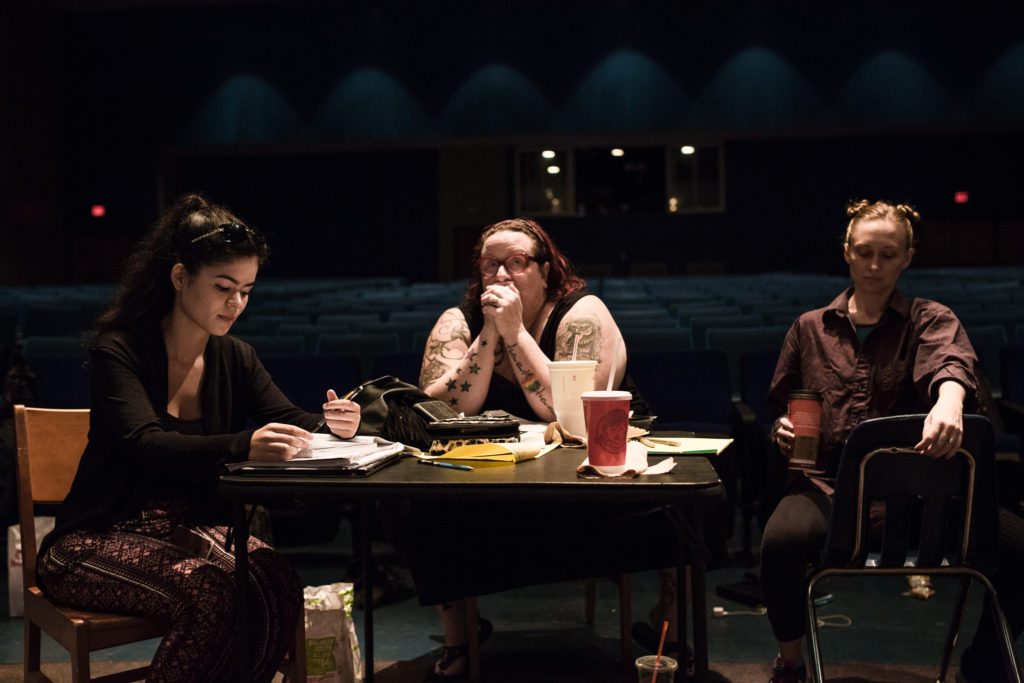 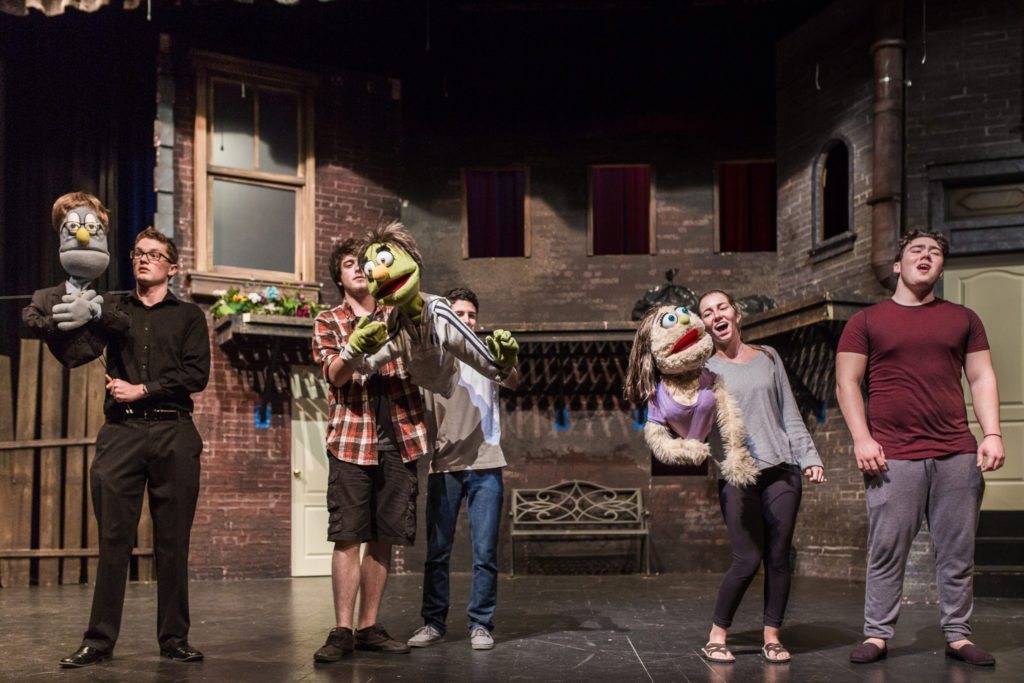 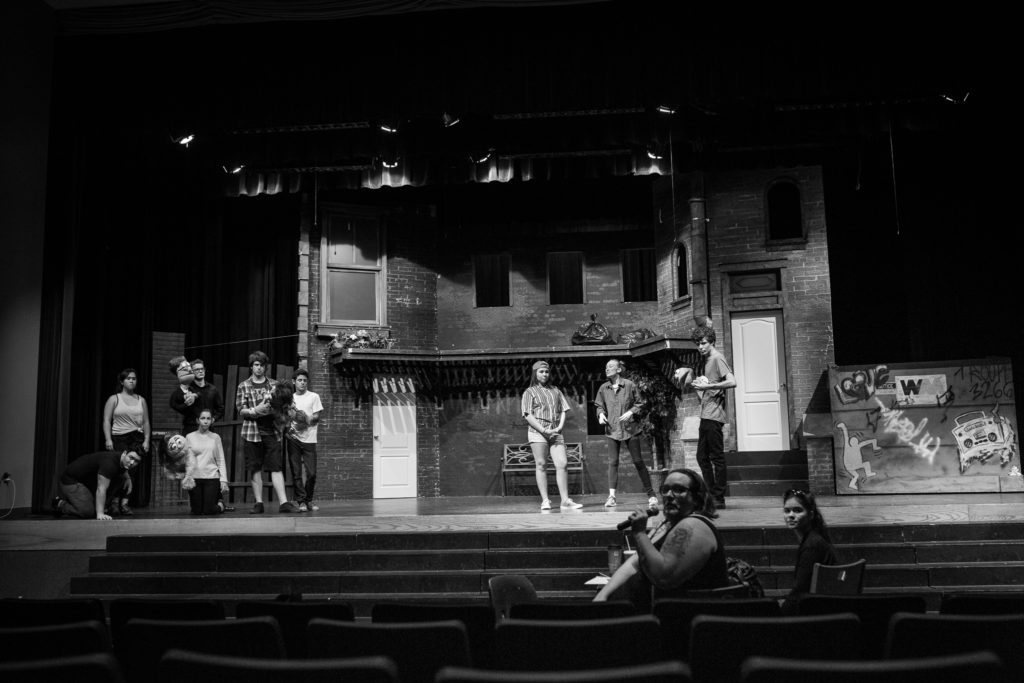