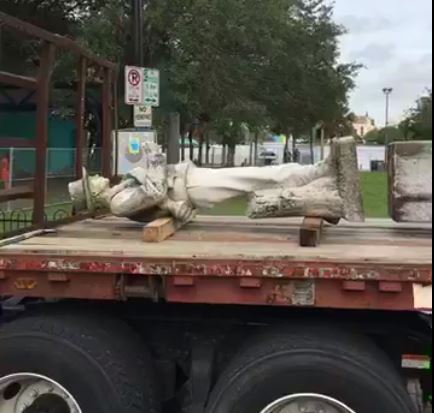 The City of Orlando began carefully disassembling the Confederate statute at Lake Eola Park this morning, as part of its relocation to the Confederate veterans section at Greenwood Cemetery.

According to a release from the Mayor’s office earlier this morning, the City is engaging local historians to develop and install an “educational interpretive panel near the monument that would help to put the monument in proper historical context and serve as an educational tool for the Orlando community and future generations about this painful period in the country’s history.”

The City is building a new base for the statue and will re-install it at the cemetery in the next six weeks.

On December 7, 1893, City Council approved a 50 foot Confederate section to honor confederate veterans of the Civil War.  The following year, council approved the same sized parcel for the Union veterans just west of that site.

Some of the Orlando veterans buried in this section are:

There were reports of the work crew uncovering a time capsule in the statue when they moved it. We have reached out to the Mayor’s office about their plans for the box, and if they will open it or place it back in the statue.

UPDATE: The rumors of the time capsule were confirmed by Greenwood Cemetery Sextant, Don Price, who reported to Bungalower that they uncovered a locked black metal box measuring about 11″ x 14″ x 5″ and estimated that it weighted roughly three pounds.

Click HERE to see our recent photo tour of the Confederate section of the cemetery.