SPONSORED by Lynn Fashion and Bridal: Inhabit is a series by local photographer David Lawrence (Website), that shares stories about the people who call Orlando home. It’s an exploration of where people live and spend their days, whether that be at home, in an office, the streets of downtown, or anywhere in between. Lawrence explores who people are and how they ended there. I’m Dustin Wyatt Carpenter. I am 28. I’m a Director of Development at the Dr. Phillips Center for the Performing Arts. I also chair the Pine Castle Historical Society board. I grew up in Lake County, Florida and spent about six years in Gainesville doing my grad and undergrad. I moved to Orlando six years ago by chance. I like motorcycles, skateboarding, travel and anything from India [Dustin has visited India twice over the years]. I love personality assessments. I’m an ENFP; on the Enneagram I’m an achiever and romantic individualist. Where are we and why is this space important to you?

Right now we are at my house. I got this about three and a half years ago now. It’s important to me because growing up my dad (he works for Orange County Sheriff’s Office) would always buy and sell homes. We moved every two years, pretty much on the dot.

After about a year of living in Orlando, I ended up really wanting to pursue buying a home and an investment that I could turn around and flip in a couple years. I actually had a contract on a different home across the street and stumbled across this on the first day it was listed. They hadn’t even put the “For Sale” sign up yet. I low-balled. They accepted. I was super pumped on it and it went from a place that I was looking just for an investment to flip to something that I completely fell in love with.

After I signed the contract, the real estate agent didn’t want to drive back to let me in. So they gave me the four-digit code to get in and it was the same code that my dad would always use for all the things he had. So it was a number I would consistently use. Out of all the different numbers that could have happened, I was pretty stoked on that. I think I might have had a tear come out. It seemed like it was too good to be true for sure. And I definitely got it at a steal because being at that time, 25 and getting a house, it was way outside of what I was even imagining.

Dustins house is a skate and moto-emporium. He currently has eight different bikes, a garage full of  tools to work on those bikes, and a private skate ramp in the backyard. If you check your Instagram, the lifestyle you have curated online is completely different than the suit and tie you wear by day. Can you tell me about the stark contrast, and was this intentional?

I don’t think it was necessarily intentional. Maybe in some sense. I remember changing my Facebook name to “Dustin Wyatt” so that people looking at me when I was applying for internships and business school wouldn’t see my skateboarding, social profile, and all that stuff and potentially affect my job opportunities. My professional identity was just “Dustin Carpenter, MBA dude, whatever…” And my personal life being the skateboard-moto-kinda-grungy-hippy-kid at that time. I definitely feel like both are me and I’ve just kind of grown into them.

But I can also see of the dichotomy between running into friends while at work and kind of getting a double look or vice versa where I’m out skating/riding and run into a colleague. It’s kind of funny when they see the other side of me I guess. 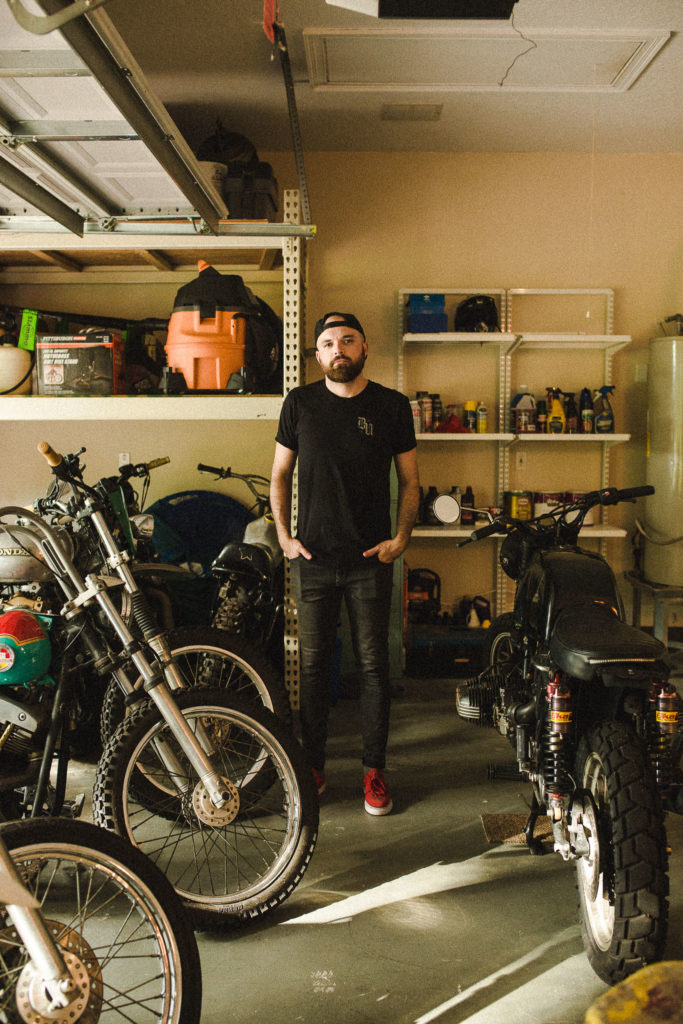 As he continued speaking, he told me more about his “chance” move to Orlando.

So, long story short, my plan was to, after grad school, move to India; and that was set in stone for about a year. I had one semester left and I lived overseas for a few months and while I was over there I met this guy in Rome that pretty much offered me a job in Orlando with Orlando Health.

Wait, so you met the guy in Rome?

I met him in Rome. On a cruise as a part of the trip. I lived in Prague for a month. And I was headed to India after the end of this trip. He was kind of talking about this job opportunity. And I was like, “Sorry, I’m moving to India” and at this point I had super-long hair, full beard. I don’t know what he was thinking, even seeing me. I think at this point I thought it was cool to not wear shoes to class at UF.

I wasn’t too interested. But I kind of started meeting some of the leadership and stuff there and came in for a few different tours and interviews and I just felt like it was something I couldn’t pass up and that kind of spurred into moving back to Orlando. Would you say that you’re happy now with where you are?

That’s a tough question. In one aspect, absolutely! I know I’ve been extremely fortunate and that I’m where I am today because of those who have inspired, mentored or invested in me throughout my life. I also love this city and have an amazing community here. I’m beyond grateful to work at the Dr. Phillips Center for the Performing Arts and have the opportunity to be a part of something that is truly transforming the arts and culture of this city. In my profession and volunteer roles I get to serve others and invest in this community, which brings me a lot of fulfillment. So to answer your question is “yes.”

But in another aspect, “not quite.” I struggle with being content in the day-to-day. Personal growth is very important to me and I know there’s so much more potential I could be living [up to]–– from being more available to family and friends, reading more books, diversifying investments, meditating more, going to bed before 2 a.m., loving others better, procrastinating less, saying “no” more often…the list goes on (there’s a real list). I’m improving, but it’s a slower process than I’d like. 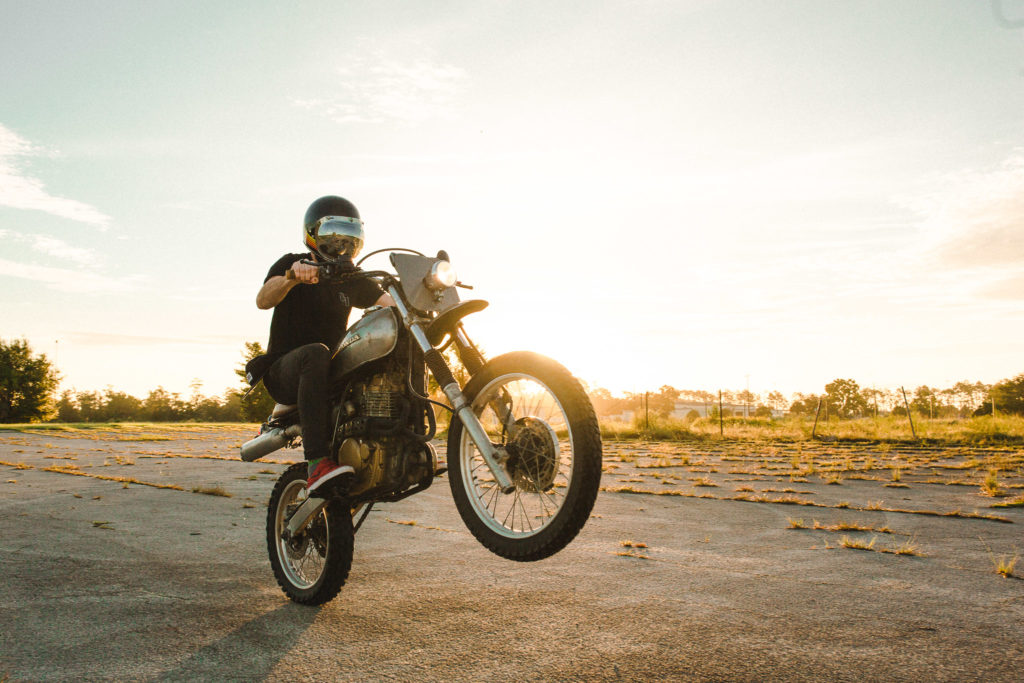 Earlier we got photos of you skateboarding and riding motorcycles, how did you begin doing both?

I think the motorcycle passion definitely started when I was 12 or 13. I forget [the exact age], but one of my birthdays I remember my dad wheeling in a Yamaha TTR125 and being so pumped on that. And at this time we lived out kind of in the country – Montverde/Howey, in the Hills area. So, I rode that thing all the time. I loved it. And skateboarding, kind of around that same time frame. I remember anytime I could go to Vans Skatepark, I would take the bike and skateboard and head over that way. 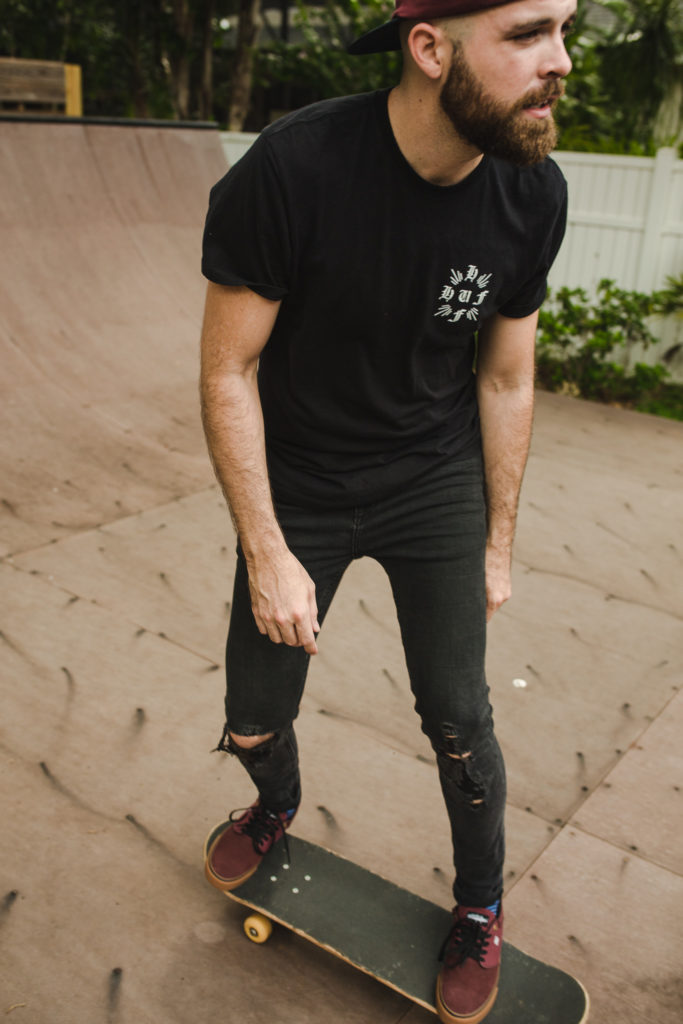 Do you think you’ll get to a point in your life where you’ll feel like you’re too old to do those things?

No man, I’m constantly encouraged by seeing old dudes still rip. Especially motos – I can do that forever. Maybe not the dirt biking, that’s my newest passion right now. Dirtbiking for a good amount longer and skateboarding I think the same thing. But I’m definitely slowing down a little bit. Things hurt a lot worse than they used to and it takes me longer to recover. But no, my dream is to be able to ride motocross and skateboard with my kids. For sure I’m going to do that.

Do you have a favorite Orlando spot besides your home and where you ride?

I know I’ve already said it, but I completely love where I work. The Doctor Phillips Center is just such an amazing space. Every area of that. But, The Guesthouse, Tako Cheena, Dandelion Communitea Cafe, and Ethos Vegan Kitchen. Other than that, Bombay Cafe is my favorite. It’s over on OBT. It’s a little sketch, but amazing. Some of my favorite for Indian food. It’s all vegetarian (which I have to warn people about). Sometimes I’ve forgotten that and they get upset. Anyway, it’s one of the best Indian places. They have an Indian grocery store, a sari store, and a video store. And you just walk in and open the door and it’s just like being back in India. It’s just my favorite feeling. I love it. And its only five minutes from my house. So it’s kind of great. 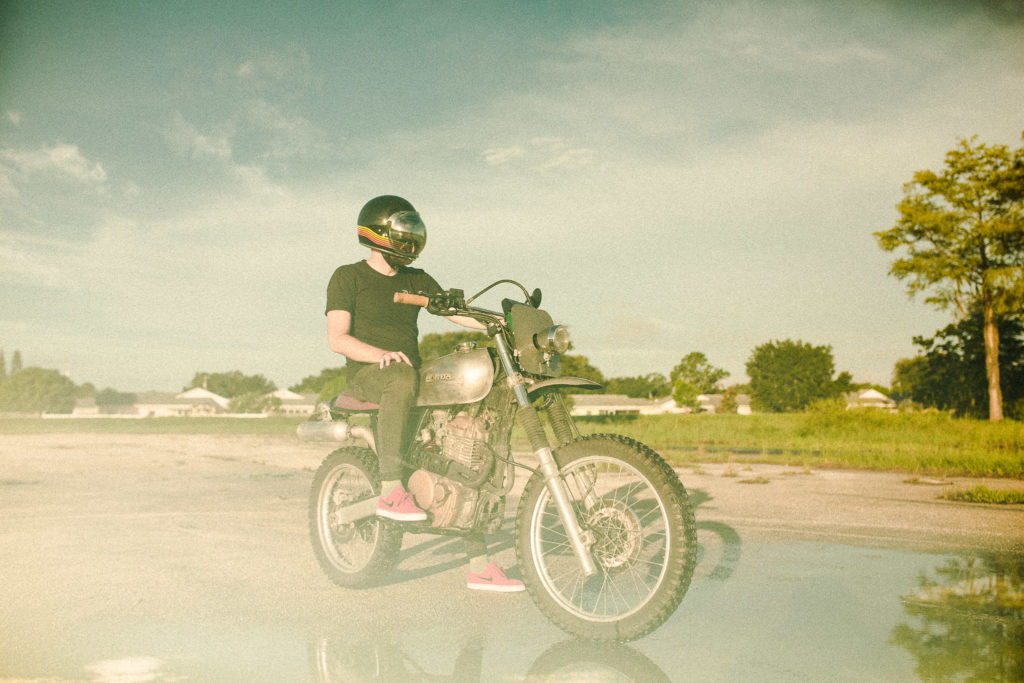