SPONSORED by Orlando Ballet’s The Nutcracker: Inhabit is a series by local photographer David Lawrence (Website), that shares stories about the people who call Orlando home. It’s an exploration of where people live and spend their days, whether that be at home, in an office, the streets of downtown, or anywhere in between. Lawrence explores who people are and how they ended up where they are.

Can you let our readers know who you are?

My name is Robert Hill. I’m the artistic director of the Orlando Ballet and I’m originally from Long Island, but I grew up in Merritt Island Florida.

The significance of this space is that it is our third or fourth temporary home since being moved out of our building on Lake Ivanhoe. We’ve just broken ground for our new building, which is being built right now; Harriett’s Orlando Ballet Centre, C-E-N-T-R-E. She stipulated the R-E, did you know that?

One of her first stipulations was for the–

Before we get into your career with the ballet, I just want to know a little bit more about you personally and your time spent with the Ballet. How much time would you say you spend with your team in a given week?

We work Tuesday through Saturday, 9 to 5. 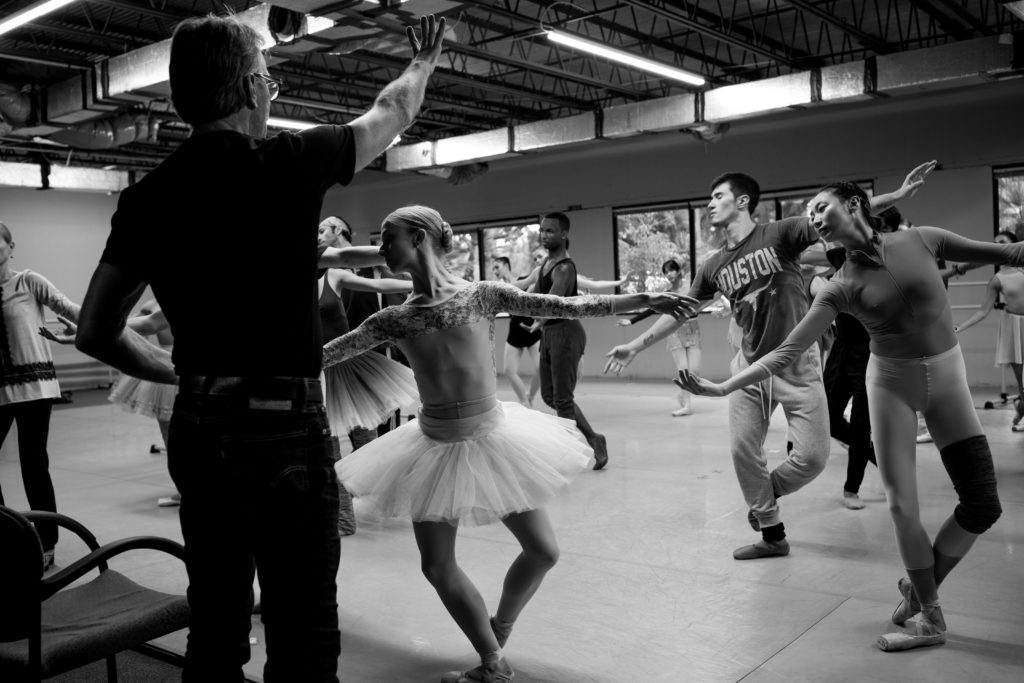 Then are you working outside of that as well?

Robert: Essentially, Sundays and Mondays are my days off. Typically, because our admin staff works Monday through Friday, I typically don’t get my Monday off. Off hours are when I do my music research and what I’m going to conceptualize in choreography and so on so forth. I live my job.

Even when you’re not here, you’re still planning something around the ballet.

Robert: Even when I’m driving, it’s about ballet.

You said you’re from Merritt Island and I’ve read that you have worked literally from coast to coast with the San Francisco Ballet all the way to the New York City Ballet.

Robert: All over the world.

Can you tell me how you ended back up in Orlando?

Robert: I danced with American Ballet Theatre until I was 41 and then I directed a company in Monterrey, Mexico for four to five years directly after that. I kept my place in New York and I went back to take a year off to recharge my battery from that experience because it was tough, but I got a lot done.

While working in Monterrey?

Robert: Yes. Because I came down regularly to visit my family, word got out from Orlando Ballet because I had hired one of the male dancers from here to be a guest dancer in Monterrey, Mexico. He stayed in touch and he said, “Mr. Hill is coming to town.” Anyway, the board of Orlando Ballet at the time called me and asked if I could come in for an interview, so I did my first interview at the Orlando airport flying back from here to New York.

When was that again?

10 years ago, because you just celebrated 10 years with the Orlando Ballet.

I watched the Growing Bolder video that you did and you talked about how your introduction to ballet was basically because your coach in another sport had told you that it would help you. Can you tell me how soon after that you fell in love with ballet?

Did you stop the other sports and what were they?

Robert: That was gymnastics and diving. My coaches wanted me to compete in both. I think they were in cahoots, I think they were having those little conversations. I did, I went out to the Dussich Dance Studio and everything went away. I found my life. Never had to question myself.

This is in Merritt Island?

Robert: At the time, it was Cocoa Beach. I graduated high school, I got a scholarship to the School of American Ballet, which was the school of New York City Ballet. I did that and a couple years later, I got an audition for American Ballet Theatre and Mikhail Baryshnikov was the artistic director then. After two classes, taking company class at the Metropolitan Opera House, Misha offered me a contract. That was 1982.

As far as the ballet goes, you just broke ground on your new home, so you won’t be bouncing around anymore. Can you tell me about your vision going forward for the ballet in that space?

Robert: The challenge that you can imagine when you have three aspects of the organization, your school, your admin staff, and your company in three different locations. Even with technology and phones, it’s just going to make it so much easier for us to get things done just by being under the same roof. I think also a lot of the school kids being able to be in the same atmosphere with the company, they can see them in rehearsals and things like that, that’s one of the appealing things about coming to our school.

It’s attached to a company and that they get to dance with the company in Nutcracker at the Dr. Phillips Center for the Performing Arts. Vision going forward, we’ve got a new theatre. We want to go fully digital in terms of our production elements, in terms of backdrops and legs and set elements and everything to be more competitive in the theater world, with some of the Broadway shows and things like that.

I also really, really, am hoping in the next couple of years to develop a new dance-driven story in the model of West Side Story or Twyla’s Movin’ Out, but with new music and hopefully some singing, but really be dance-driven. That could be world-premiered here and then transferred to a Broadway stage. 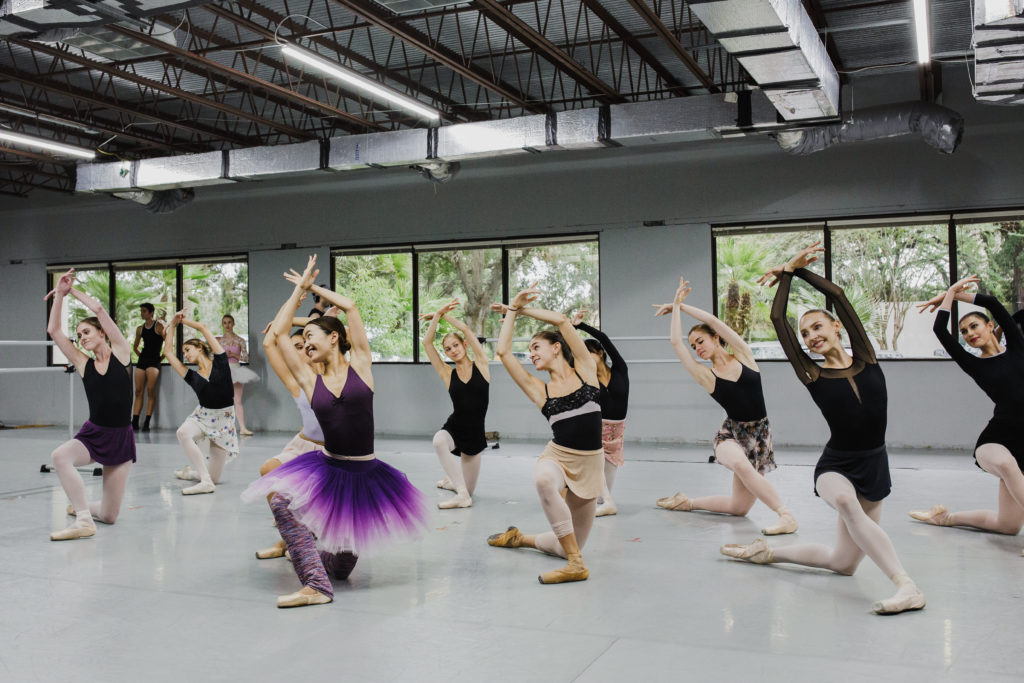 Would this be something that you created yourself?

With that in mind, where do you generally find your inspiration to create? You’re talking about creating this world-class thing that is from Orlando and is your own. Where do you find inspiration for that?

Robert: Talking to people, seeing what’s going on elsewhere. We’ve got this new board member who was one of the producers of American in Paris on Broadway.

Robert: It’s a big deal. Memphis on Broadway. He’s the real thing. He pulled me aside and said, “Let’s dream big.” You find that the biggest inspiration then would be just interacting with others, getting outside of your head?

Robert: For example, I thought when was the last time Snow White and the Seven Dwarfs [was performed] because that could give you this platform for seven different [platforms], to tell the story through their physicality. It’s a known story. It could be really, really fun, so I Googled it. Last time it was done, in any way at all on Broadway, was 1912.

You Just put it out there and you start getting responses. Arcadian [Broad] is composing his own music, so he’s going to be a very big part of whatever this is that we’re doing. What are some of the other accomplishments?

Robert: I think Carmina Burana, which we just revived for the beginning of my 10th season. I think now that we’re bringing in such a huge audience to see ballet, one of the things it’s always been my mission is to make ballet relevant. People who have never been to a ballet usually have a preconceived idea that it’s “Dinky, dinky, dink.”[makes sounds], and there are a lot of little fairies running around until they come to see something like Uncorked, where you come and watch a rehearsal up close and you see the sweat.

So much work goes into it.

Robert: I guess the mission there is to get people in who go, “Man, if I only knew,” and then they’re hooked. I feel like I’ve really made great strides in 10 years here in Orlando with that. I think just really making this ballet company super high-level that people are taking it seriously all over.

Do you feel like they didn’t take it seriously before you got here?

Robert: I did, yes. It’s interesting. I was having lunch with a local person, Linda Gonzales, she was saying how– I experienced it myself 10 years ago. I was moving here and I’m new and I’m meeting people. I said, “Hi, I just moved here from New York,” and they’d respond with a, “Why?” There was so much of that. I feel that, obviously, Orlando was growing like crazy and the Orlando Theatre scene really was a big part of the reason why I took the job.

To be part of the cultural scene, the performing art scene, that is giving Orlando an identity that people are proud of so that people won’t say, “Why did you move here from New York?”

I want to ask you about The Nutcracker. When’s the last time you did the re-stage?

Robert: The last time I did a new production, new version of it, it was here 10 years ago. What we’re doing, we’ve been doing it for 10 years basically. In a large production, like The Nutcracker that you’ve been actively working on for the last 10 years, how involved are you in the production? Do you get involved with the costumes, the lighting?

Even the snow the snowflakes throw?

Robert: Once upon a time, that was not part of my choreography. Once upon a time, about four, three, five years ago, a couple of the girls decided to just do it. I went, “Holy cow,” and then I went, “Every single opportunity you get a chance, dig your hand into those bins.” It just looks stunning.

It is crazy how when you let things go a little bit and loosen your grip, that magical things really can happen.

Robert: You have to encourage people to make mistakes. I know in my choreography, a lot of the things that I go, “Go, go, go.” They fall and I see that there is logic in the fall. That the reason that their energy took them in that direction, let’s capitalize on that. It makes sense, and if they didn’t actually do it, make the mistake, I wouldn’t have been led in that direction. I always tell them, “Don’t ask me details yet, just go. Just go.”

Then as we go, then you define it, you polish it, you define it and polish it like that. Initially, I want them to bring themselves out in it, too.

Did you ever dance The Nutcracker production?

Robert: Yes. The last few years of my career, I am just the Cavalier, Sugar Plum Fairy Cavalier. I was always the prince charming. 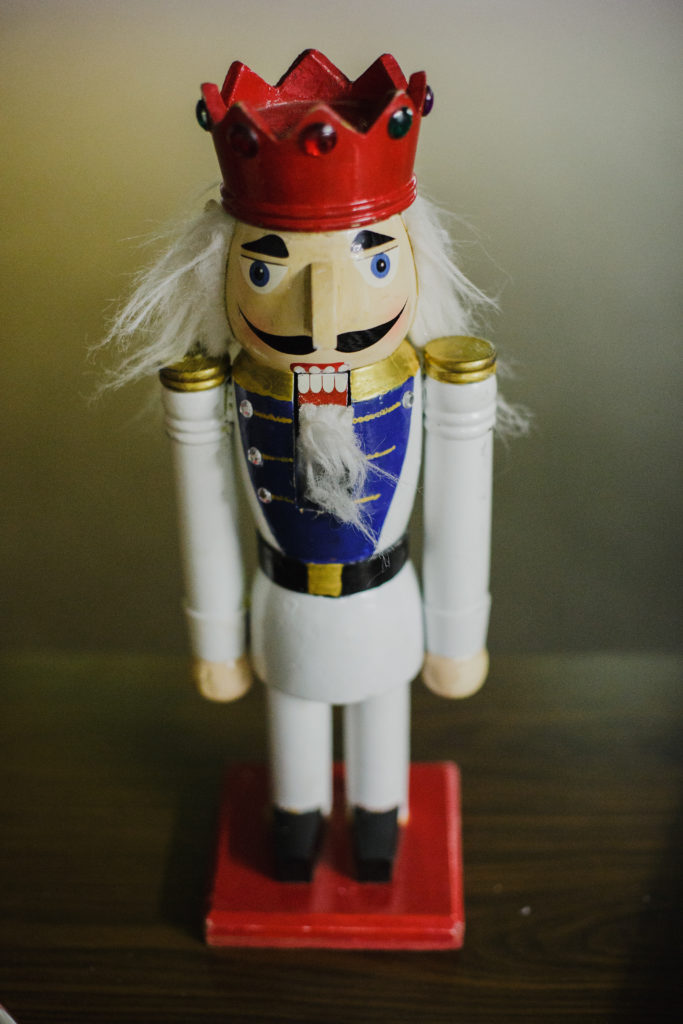 Why do you think The Nutcracker is so nostalgic?

Robert: I get asked that every year and I think I should come up with some kind of a stock answer. I do have a great answer though, actually. The snow music. When the snow or the duet comes on, it’s Tchaikovsky at his finest. The snow music and so much of his Swan Lake music.

For a lot of people, it’s their introduction to the ballet.

Tickets for The Nutcracker can be purchased HERE.