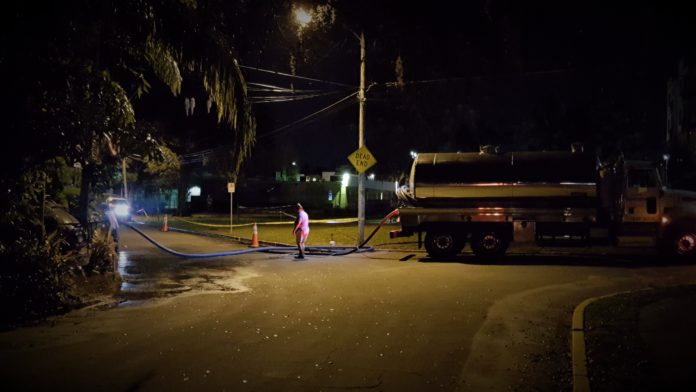 UPDATE: The Lake Alerts for Lakes Sue, Formosa, and Rowena have been lifted.

“As I recall, this is the fourth spill into the neighborhood and the second into the lake. At this point, this can be considered not only a mechanical pump failure, but a failure of the landowner to vigilantly maintain his property, and a failure of our governments; national, state, and local – to effectively regulate and oversee such installations that pose so grave a risk to our health and our environment.” – Gordon Spears

A malfunction of a bypass valve closure at a private lift station behind The Gallery at Mills Park late in the afternoon on Tuesday, January 8 resulted in a sewage leak into a nearby storm drain.

According to a Lake Alert issued by the City of Orlando, approximately 1,000 gallons of sanitary waste flowed from the lift station valve, across the Orlando Urban Trail, along South Lake Formosa Avenue, and into the nearby Lake Formosa.

A private contractor has reportedly repaired the damaged valve closure and cleaned all areas impacted by the spill, including the nearby trail and street.

The nearby lakes, including Sue and Rowena, have been closed to water contact activities until further notice. That includes irrigation. City Stormwater personnel will be collecting bacteria samples until bacteria counts drop to acceptable State Water Quality Standards.

Bungalower readers may recall the first instance of a sewage leak from the same lift station back in September 2017 following damage from Hurricane Irma, which we reported on HERE. At that time an estimated 15,000 gallons of waste was discharged into nearby Lake Formosa.

Since then, a number of leaks have been reported from the lift station, including March 2018 which we reported HERE, and that the Mills Park Association was issued a $1,250 fine for the spill.

Commissioners get heated over affordable housing

Back To The Future Day