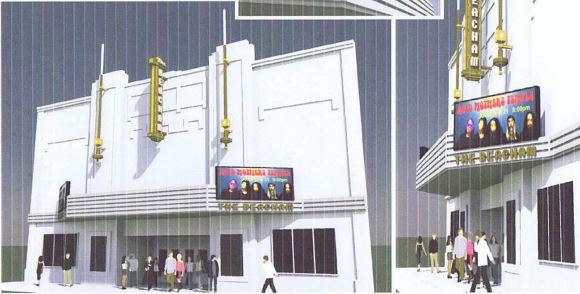 The owners of the Beacham Theater filed for a Major Certificate of Appropriateness with the City of Orlando to alter the building’s facade and that of the adjacent Beacham Block building which was approved this month by the Historic Preservation Board.

The theater was built in 1920 by Braxton Beacham on the site of the old County jail and was modified by each consecutive owner since then, including a Vaudeville venue, Laser World, and Moulin Rouge.

Braxton Beacham was a cattle rancher and citrus grower as well as a real estate agent and the Mayor of Orlando in 1907.

The work will be paid for via a Downtown Facade Grant meant for the rehabilitation of historic buildings in the amount of $120,000.

Part of the request called for a new digital marque that will resemble one that was installed at the historic Apollo Theater in New York City, as well as upgraded storefronts, lighting fixtures, and more.

The renovation will be split into two phases; the first will cover the theater and the first two commercial spaces to the north which house The Social and Aero Bar and the second will include the next five spaces that house tenants like Planet Pizza.

The Appearance Review Board must also approve the plans in order for the project to move forward.

Construction is expected to begin in early 2020.

0
Alicia Keys will stop in Orlando for her pending world tour on Saturday, September 19, 2020. The 15-time...
Read more
Buildings

0
A vacant warehouse that once housed a men's shelter in Parramore caught fire this morning and the Orlando Fire Department reported that...
Read more
Coming and Going

Rethinking the City as Age-Friendly