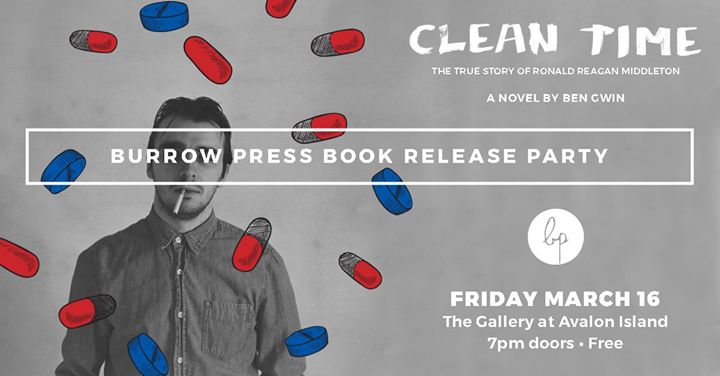 Doors: 7pm. Reading: 8pm.
Beer, wine & books for sale.
No tickets required, but RSVPs encouraged.
This event is free. Here’s how to support:

Pre-order Clean Time here. Enter code AWP to avoid shipping and pick up the book at the event (http://burrowpress.com/clean)

(Choosing the above within Eventbrite includes fees.)

Visiting from Pittsburgh, Ben Gwin will enlist 9 local writers to help him read from the reality TV show script that appears within his novel. He’ll be available after the reading to sign books.

Can’t make the reading itself? Show up anytime. We’ll be partying before and after. Come hang out with all the friendly folks who populate Orlando’s literary community.

Tons of FREE street parking along Rosalind Ave and all around Lake Eola (meters are free after 6pm).
Central Parking Garage right behind the venue between Central and Pine.

Ben Gwin’s writing has appeared in The Normal School, Mary: a Journal of New Writing, Bridge Eight, Thin Noon, Belt Magazine and others. He’s taught creative writing to inmates in the Allegheny County Jail, and to veterans in the Pittsburgh VA. He lives in Pittsburgh with his daughter.

Jon Chopan is an assistant professor of creative writing at Eckerd College. He received his BA and MA in American History from SUNY Oswego and his MFA from The Ohio State University. His first collection, Pulled From the River, was published by Black Lawrence Press in 2012. His work has appeared in Glimmer Train, Hotel Amerika, Post Road, Epiphany, The Southampton Review, and elsewhere. He is the winner of the 2017 Grace Paley Prize for Short Fiction for his collection Crisis Hotline: Veterans Press 1, which will be published by the University of Massachusetts Press in the Fall of 2018.

Burrow Press publishes contemporary literature in print and online, as well as connects the Central Florida community to literature via our podcast, events and reading series. Through these mediums, BP has served over 1,000 writers since its founding in 2010.

80% of books published in the US are published by 5 commercial houses. Burrow Press is one of the only independent literary publishers in Florida.

If you love what we do and want to help sustain us for years to come, the best and most meaningful way to show your support is by becomine a Subscriber. You get the 4 books we’re offering in a given year, shipped for free, as well as acknowledgement online and in the back of our books. Plus all kinds of other special stuff, which we usually think up at the last minute. >> SUBSCRIBE! ABOUT OBRA/ARTIFACT

Obra / Artifact is the genesis of student collaboration at Stetson University’s Low-Residency MFA of the Americas. Obra/Artifact is a twofold endeavor: we are interested in the intersections of writing, art, and language. We situate ourselves at the borders of genre. As editors, we encourage a diversity, both of style and identity. We seek the reappraisal of traditional genre lines, looking to expose the new and exciting work being done around the world: anywhere that genre, medium, and craftsmanship are being broken down into their component parts and recombined in compelling ways.