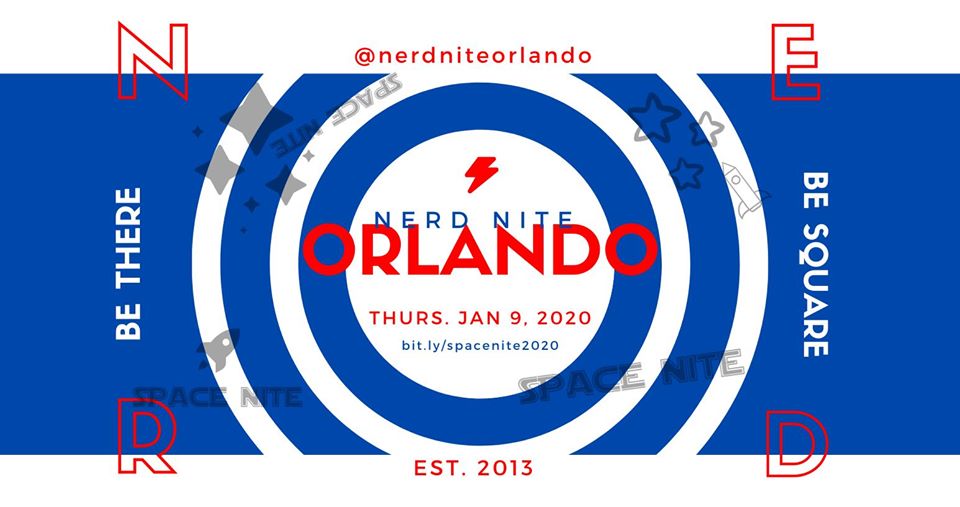 Join Nerd Nite Orlando on January 9th as we launch into the new decade with SPACE NITE 2020.

Nerd Nite is an evening of entertaining and educational presentations. Speakers present for 15 minutes, followed by a brief Q&A with the audience. Nerd Nite operates in over a hundred cities around the world and launched in Orlando on Thursday, March 14, 2013.

PRESENTATION #1: “What Happened When I Tried to Leave Space Exploration” by Robin Seemangal

Robin Seemangal is a Brooklyn native who has been reporting from NASA’s Kennedy Space Center since 2014, covering SpaceX’s race to build the reusable rocket and NASA missions to the International Space Station and other destinations throughout the solar system. He’s written for the New York Observer, WIRED Magazine, Popular Mechanics, Popular Science, and regularly appears on BBC. Today he is the Chief of Content of Supercluster, the world’s first design agency dedicated solely to space exploration. Supercluster was founded by A24 Films and GrandArmy.

[Robin’s company is doing a reprint of Falcon Heavy posters to hand out. Its also a launch viewing guide]

Did NASA really blow up Pluto? I saw on a t-shirt so it must be right! Join planetarium director and astronomer Derek Demeter as he discusses several astronomy misconceptions found on supposed nerdy t-shirts! Scientifically accurate but funny nerdy t-shirts will be given out as prizes so you don’t want to miss this!

Derek Demeter is the director of the Emil Buehler Planetarium at Seminole State College in Sanford, Florida. Derek also enjoys promoting science beyond the planetarium with his work as an astrophotographer, which earned him pictures seen in NASA’s Astronomy Picture of the Day website, Universe Today, Astronomy Magazine, and Sky and Telescope.

[Derek will be bringing a stellarvue telescope for some stargazing.]