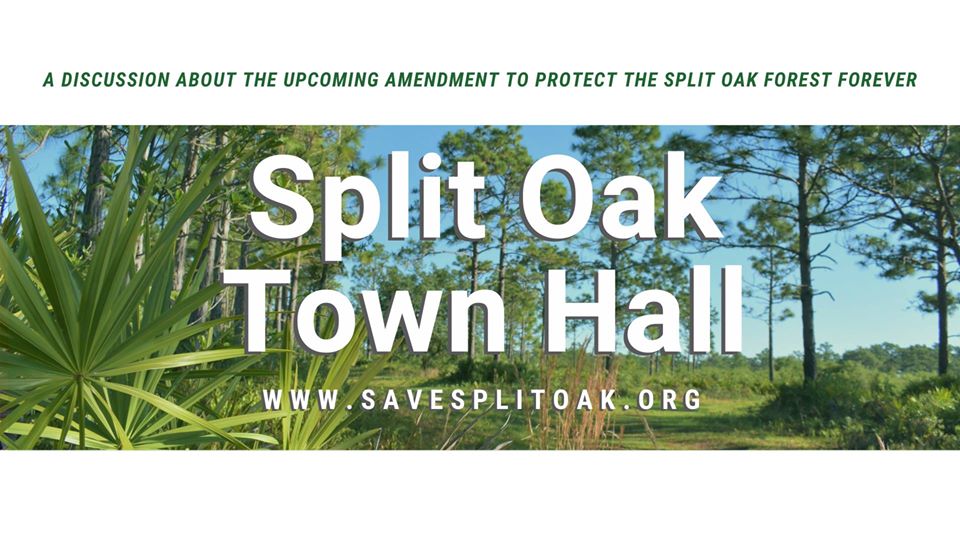 The Split Oak Forest is home to hundreds of threatened species in need of protection from the Central Florida Expressway Toll Road threatening to expand through the middle of this important forest. This campaign is a grassroots initiative expanding the reach to voters throughout Orange County to spread awareness on the upcoming election.

Endangered keystone species like the gopher tortoise, Florida Scrub-Jay, Florida Panther, and Sandhill cranes are all located on-site. This toll road to nowhere will kill many animals and damage vital ecosystems that sequester carbon from the air, purify our water systems, and host these incredible animals all in danger of being extinct for future generations to miss.

This panel includes incredible activists and community leaders including:

Valerie Anderson is the Director of Communications of the Florida Native Plant Society and the President of Friends of Split Oak Forest. She likes to make maps and has a degree in Geographic Information Science & Technology (GIST) from the University of Southern California and a degree in Horticulture from the University of Florida. Valerie has been fighting to protect Split Oak Forest from the Central Florida Expressway Authority’s Osceola Parkway Extension, a toll road to new development that could be easily routed around the Forest but is currently planned to destroy hundreds of acres of conservation land full of threatened and endangered plants and animals.

Mr. Jimmy Auffant who is a lawyer who has lived in Orange County since 1977 with his wife, daughters and grandchildren. He has served on various organizations such as Legal Aid of Orange County, Teen Court, as a trustee of Valencia College, Commissioner of aging, Community Action Board, MIWBE Advisory Board, Winter Park High School SAC, OCPS Reappointment Committee, and in 2020 was appointed By Commissioner Maribel Gomez-Cordero to the Orange County Charter Review Committee where he was the vice-chair and presented the Sp[lit Oak Protection act where he chair that subcommittee and help create the charter amendment to be voted on to stop all type of construction on Split Oak.

Rachel E. Deming is a tenured Associate Professor of Law and Director of the Environmental and Earth Law Clinic at the Barry University Dwayne O. Andreas School of Law. Before coming to Barry, she was director of the International Transactions Clinic and a professor from practice at the University of Michigan Law School. Her research interests include opportunities for collaborative environmental governance between the public and private sectors, evaluating state constitutions and common law as the basis for protecting natural resources, and Strategic Lawsuits Against Public Participation (SLAPPs).

Prior to joining academia, Professor Deming practiced law in New York for over 25 years. She began her career as an associate at a large New York law firm working on international banking issues and cross-border mergers and acquisition litigation. She left to become in-house environmental counsel for a Swiss-based global manufacturing company, a position that included advocacy for corporate sustainable development. She negotiated several consent agreements involving cleanups of major Superfund sites and also managed the resolution of high-profile tort claims against the company outside the courtroom. Recognizing the value of alternative dispute resolution, Professor Deming returned to private practice in 2007 and became a mediator.

Eric Rollings is the founder/CEO of the Foundation for Florida Environmental Protection. He has played major role in passing ordinances, resolutions, and legislation
on both local and state levels including Amendment 1, the effort to ban fracking in Florida, “NO FOAM ZONE”, and others.
Eric is currently the Chair of the Environmental & Energy Advisory Committee for Congressman Darren Soto.