The Steepwater Band at The Social 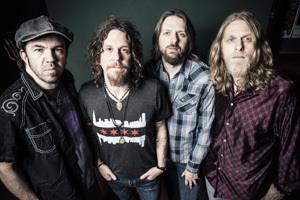 Get tickets: http://ticketf.ly/1lZBdva
Details: The Steepwater Band at The Social

After two highly successful Halloween shows where The Steepwater Band performed the classic live album from The Rolling Stones “Get Yer Ya-Ya’s Out”, the Chicago based group has decided to take that show on the road.
When picking a group and album for their Halloween shows, singer/guitarist Jeff Massey said “The Stones are a huge influence on our band, and ‘Get Yer Ya-Yas Out’ is complete rock n’ roll. It’s rough around the edges… it’s about attitude, the blues, big guitar riffs… it’s got some Chuck Berry & Robert Johnson, and isn’t too far off from what we do in a Steepwater show anyway.” Drummer Joseph Winters added “Ya-Ya’s is perfect for this band. That live album in particular has a spirit and element of going to the edge. So we go out and put ourselves on that line. Then that energy of this live show gets traded back and forth between us and the crowd.”
The Steepwater Band decided to take this show on the road to give their fans something different to catch, while a new TSB studio album awaits for release in early April. “People really reacted to those Halloween shows, especially big Stones fans,” bassist Tod Bowers adds. “We thought this could be something fun to do this winter until the new record drops in the spring. You know, give our fans a little something different than just a typical Steepwater show.”
In addition to performing “Get Yer Ya-Ya’s Out” in its entirety, the band also plans to hit songs from their “Diamond Days: Best of TSB 2006-14” album that was released this past March. “It’s really fun to go from playing classic Stones songs like ‘Jumping Jack Flash’, ‘Sympathy for the Devil’ & ‘Midnight Rambler’ to our own Steepwater Band tunes like ‘High and Humble” or ‘Dance Me a Number’,” says guitarist Eric Saylors. ”It’s hard not to notice the similar vibe!”
The first leg of this Winter Tour begins Jan 9th in Indianapolis, Indiana, heads southeast to deep Florida, then back to the Midwest to Lincoln, Nebraska. Please visit http://www.steepwater.com for ticket info, and a complete listing of the tour, as more shows will be added.
  
TSB “Ya-Ya’s” Winter Tour
01/09 INDIANAPOLIS, IN @ BIRDY’S
01/14 MEMPHIS, TN @ LAFAYETTE’S
01/15 STARKVILLE, MS @ DAVE’S DARKHORSE 01/16 JACKSON, MS @ MARTIN’S
01/17 MONTGOMERY, AL @ CAPITOL OYSTER BAR 01/19 ST. PETERSBURG, FL @ ALE & THE WITCH 01/20 ORLANDO, FL @ THE SOCIAL
01/21 WEST PALM BEACH, FL @ LAFAYETTE’S 01/22 KEY WEST, FL @ GREEN PARROT
01/23 KEY WEST, FL @ GREEN PARROT
01/24 KEY WEST, FL @ GREEN PARROT
01/27 TITUSVILLE, FL @ PINTOS
01/28 SAVANNAH, GA @ BARRELHOUSE SOUTH 01/29 CHARLESTON, SC @ POUR HOUSE
01/30 MACON, GA @ THE HUMMINGBIRD
01/31 NASHVILLE, TN @ ACME
02/04 ST LOUIS, MO @ BROADWAY OYSTER BAR 02/05 DAVENPORT, IA @ REDSTONE ROOM
02/06 LINCOLN, NE @ ZOO BAR