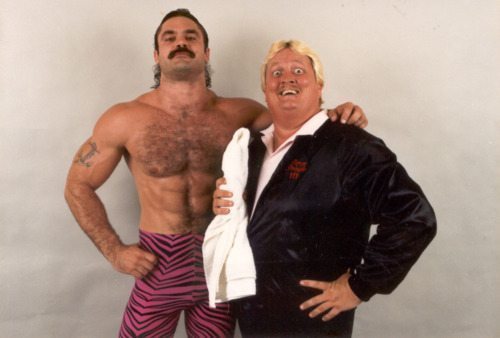 We’ve got another week of classic Florida wrestling planned.

This week will be all footage from the spring of 1985. Rick Rude has the southern heavy weight title, and Percy Pringle III in his corner. He’s in the middle of a feud with B. Brian Blair and the title is on the line.
Ric Flair is coming down to Florida to fight Wahoo McDaniel for the NWA title. He’s got a $10,000 prize on Wahoo’s head. We’ve got interviews with Ric Flair, plus tons of Florida promos, and matches featuring Abdullah The Butcher, The Missing Link, Blackjack Mulligan, Bugsy McGraw, Terry Gordy, a bloody cage match between Michael Hayes and Mike Graham plus tons more of great matches and wrestling action. All from Florida, all from 1985. On top of that killer tunes all night, and the cheapest drinks in town.
$1 PBR 10-11
$2 PBR rest of the night
$4 Wells
and $1 off everything else