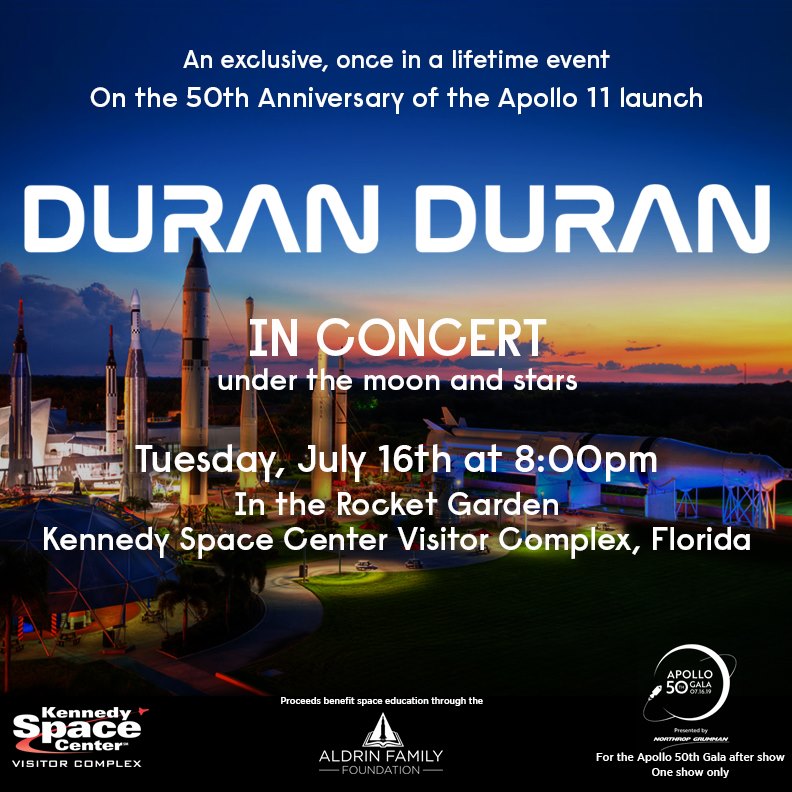 At the dawn of the 1980s, a group of young men in Birmingham, England had a sound in their ears – one with echoes of glam, art-pop and dance. The band they formed quickly became a household name and, four decades later, Duran Duran have sold over 100 million records, had 18 American hit singles, 20 UK Top 20 tunes and continue to perform to huge concert audiences around the world.The band notes that their first single, Planet Earth, drew inspiration from the first Moon landing about a decade later.

Join Duran Duran in the Rocket Garden at Kennedy Space Center Visitor Complex for a concert celebrating the historic Apollo 11 launch. Doors open at 8 p.m., followed by a set from DJ Evalicious. Duran Duran will begin a 90-minute set at 10:30 p.m.. For this special tribute, their set will include a drone performance by Studio Drift.

Concert tickets are $300. The ticket price does not include parking or daily admission, so no early entrance will be permitted.

Various food trucks will be on site, and beer and wine will be available for purchase. Guests are encouraged to bring blankets for the grass lawn, but no chairs of any kind will be permitted. The World’s Largest Space Shop will remain open, but all other attractions and exhibits will be closed for the duration of the concert.

A portion of the proceeds from the concert will support the STEAM education programs of the non-profit Aldrin Family Foundation.