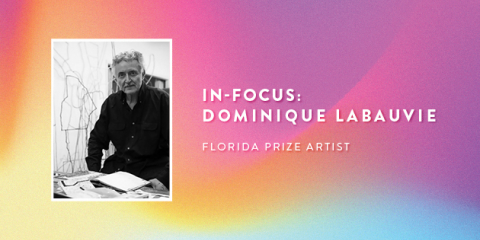 Weekly tours focus on a different artist featured in The Florida Prize in Contemporary Art. For July 13, Orlando Museum of Art will be highlighting Dominique Labauvie. Free with paid gallery admission. Pre-registration is encouraged.

Before leaving Strasbourg in 1968, Dominique Labauvie studied Art History with Roland Recht and Louis Grodecki, then continued his formation in sculpture in Paris. He had his first solo exhibition at the gallery Bernard Jordan, Paris in 1985, and in 1986 received the Villa Medicis’ Hors les Murs. In 1989 he has a sold-out solo exhibition at the FIAC Paris with the Galerie Maeght. 1997 brings him a commission by the city of Paris of a monumental cast iron sculpture titled Horizons Suspendus, which is installed in Paris on the Quais de Seine. In 2010, the new Tampa Museum of Art offers him a solo exhibition of recent and commissioned works entitled Musical Lines in My Hand. Dominique Labauvie is also a recipient of the Adolph and Esther Gottlieb Foundation Grant and the Rome Prize. He has received numerous commissions for public sculptures in Europe and the United States. His work is exhibited internationally and is included in public and private collections worldwide. He is represented by Bleu Acier Inc. in cooperation with the Mindy Solomon Gallery.