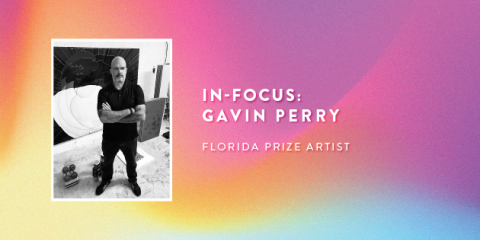 Weekly tours focus on a different artist featured in The Florida Prize in Contemporary Art. For August 3, Orlando Museum of Art will be highlighting Gavin Perry. Free with paid gallery admission. Pre-registration is encouraged.

Gavin Perry (b. 1971 Philadelphia PA) received his BFA from the Tyler School of Art in 1996. Upon graduation, he moved to Miami, FL, where he now lives and works. For over 20 years, Gavin Perry has maintained a rigorous, labor-intensive approach in his art practice. Through process-based methodology, he creates a broad array of abstract paintings and sculptures. Primarily made of resin, Perry eschews more common “art” materials for industrial ones to create works that navigate the boundaries that codify painting and sculpture. Taking cues from the vernacular of low rider car culture, Southern California finish fetish, minimalism and mid-century design, Perry creates luminous and highly refined works. His earliest and most well-known paintings employed alternating layers of clear resin and automotive pin-stripping tape. These works approached the deep candy-coats of paint seen on Chevy Impalas cruising the streets of Los Angeles. As this body of work developed, Perry unexpectedly broke the code of his hard-edge striped abstractions by imposing large monochromatic pours of resin that would creep over and veil the gem-like paintings underneath. A defining moment in his practice, the decision to hazard ruining what previously would be regarded as a complete work has profoundly impacted all future work, allowing chance and contingency to become constitutive and dynamic elements in his compositions.  His most recent sculptural works are similarly created out of multiple layers of resin. They take the shape of stoic and slick geometric totems. Of his latest work, Perry states, “through the process of production and with each layer, a fully realized painting is created, visible only until the next day’s layer modifies, blurs into or obfuscates it. Not completely deleted, its index operates like a journal entry, visible in cross sections as sedimentary stratification.”

Perry has exhibited nationally and internationally. He has had solo exhibitions at the Fredric Snitzer Gallery in Miami, FL; Barbara Davis gallery Houston, TX; and Galerie Sultana Paris, France. Perry has been included in group exhibitions in Basel, Switzerland; Milan, Italy; Marseille, France; and New York. In 2012, Perry was a finalist for the first annual Pratt Prix, an award for contemporary painting, in Paris, France. He is a recipient of the prestigious 2009 South Florida Cultural Consortium Fellowship. Perry has had his work critically reviewed in various publications including Flash Art; Art in America; Art Papers; Art Nexus; the Miami Herald; and The New Times Miami.