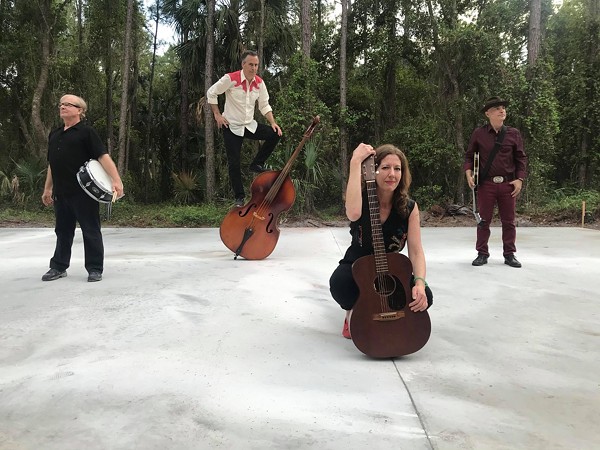 The love of early 20th century American roots music is very apparent with Oak Hill Drifters, who are based out of Orlando, Florida.  Their music and performance echos the 1940’s – 1960’s paying homage to some of the great music pioneers of rockabilly, western swing, jump blues, country and the foundation of R&B.

The band’s current iteration includes Rachel Decker, Craig Roy, George Dimitrov and Tom Pearce whose collective resumes include work with T he HoneyBees (Chicago), Nick Curran, Hindu Cowboys and Rocket-88 (Orlando).  Rachel Decker fronts the band with a vocal prowess has drawn comparisons to the likes of Janis Martin and Patsy Cline.  The band has shared the stage with Donna the Buffalo, Dale Watson, Reckless Kelly, Elizabeth Cook, Nikki Lane amongst others.

In 2016, the band released its debut 11 song compilation, “Fly Off The Panhandle.”  The band’s sophomore recording, “Lied To Me” was released in June 2018.  The band will begin working on its third recording later in 2020.