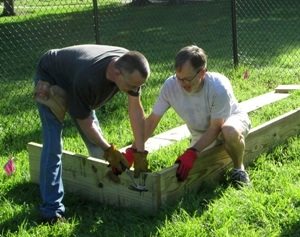 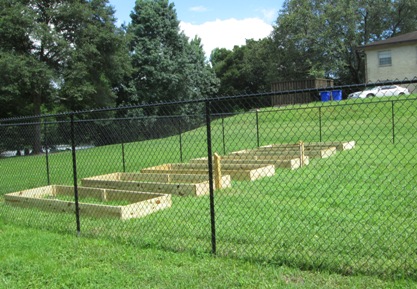 Standing in the grassy field behind the Palmer Terrace Apartment complex on July 6, Dan Homblette watched in amazement as he saw the project for which he had campaigned since 2011 finally beginning to come to fruition.

Homblette, a Downtown South area resident for nearly 30 years, is the president of the Lake Davis/Greenwood Neighborhood Association, which is currently overseeing the construction phase of a community garden, located in the Greenwood Urban Wetlands.

The neighborhood association, which encompasses two of Orlando’s most historic communities, Lake Davis and Greenwood, has a deep appreciation for resident involvement and interaction, which greatly influenced its decision to start a community garden.

“One of the things we had talked about was the old-fashioned concept of leaning over the fence and talking to your neighbors, and we thought that having a community garden would be a place where we could do that. It’s an opportunity for people living in the area to learn more about gardening, grow food locally, interact with their neighbors and just develop a further sense of community,” Homblette

Though they initially considered locating the community garden on private land, the Lake Davis/Greenwood residents soon realized that the project would require city involvement. Members of the Garden Committee, a sub-group organized by the neighborhood association, contacted District 4 City Commissioner and former Florida Department of Agriculture employee Patty Sheehan, as she is a proponent of community gardening and had previously overseen the creation of five other community gardens in her district.

“You can take the girl out of agriculture, [but] you can’t take the agriculture out of the girl. I love the whole food movement,” Sheehan said of her reasons for supporting the effort. “We needed sun, water and interested people [to start the community garden at the Greenwood Urban Wetlands], and we basically had all three.”

“[This was suitable for a Mayor’s grant because] they have a lot of community support. [I’m hoping for] continued community pride [and that residents] enjoy growing things there,” Julie Tindall, Community Outreach Coordinator for the City of Orlando, said.

Though the community garden received a $5,000 grant from the Mayor, the final appropriation of these funds was contingent upon the group matching the resources. To do this, the neighborhood association sought the assistance of businesses in the Downtown South area, including Old Florida National Bank, 903 Mills Market, Ace Hardware and Thomas Lumber, as well as individuals, who matched the grant to approximately $6,500 through monetary and in-kind donations and volunteer hours. While the garden committee obtained matching funds for the Mayor’s grant, it also navigated the permitting process, which ultimately took longer than the group had previously anticipated.

“[The biggest lessons I’ve learned through this process are] patience and persistence. There were many meetings, many applications [and] many conversations with city staff. It really was like a six month permit process, and we were thinking it was more like two,” Homblette said.

Though the planning portion of the community garden required more effort than the Lake Davis/Greenwood Neighborhood Association originally believed it would, the group began breaking ground for the installation in spring of 2013. The community garden organizers planned to have the project, located at 1321 Palmer St., available for use by August, in time for Florida’s fall planting season. After his years of effort, Homblette regarded with anticipation the opening of the garden and the positive effects it would have on his neighborhood and the Downtown South area.

“I guess [what I’m looking forward to is] the excitement and enthusiasm of the participants: the garden committee itself plus now the additional people that will have plots. They’re pretty excited about being able to grow vegetables and learn more about gardening and doing it in our neighborhood,” Homblette said.