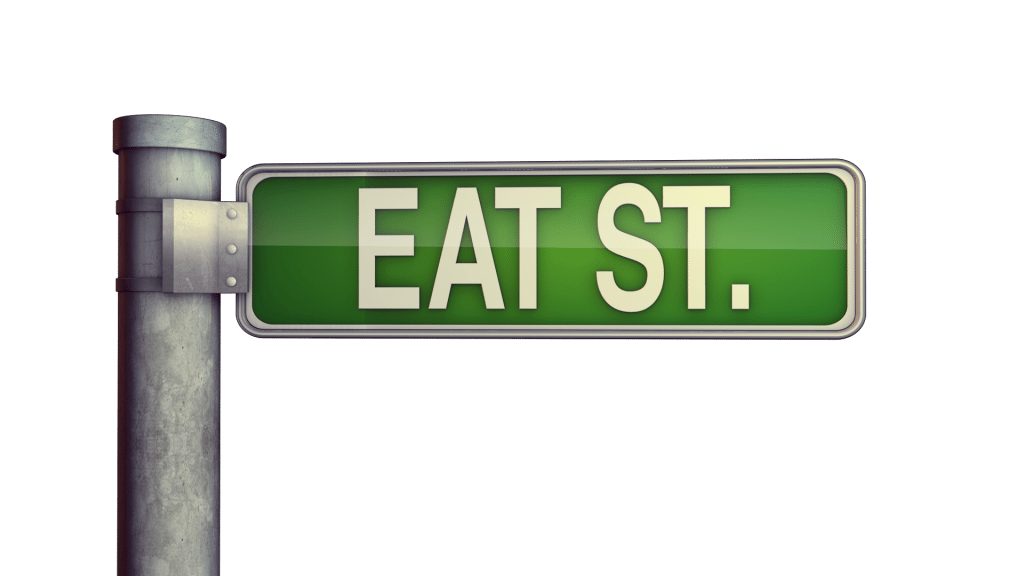 Eat Street, a show on Food Network Canada,will be in Orlando starting tomorrow shooting for their food truck show.

They’ll be highlighting some of our local Orlando food trucks at various Orlando locations like East End Market and East More Produce.

The shoots are open to the public so if you stop by let us know.

Here’s a rundown of their schedule from the Eat Street Blog:

Bem Bōm is “food so nice, we say it twice”! “Bem” and “bōm” (pronounced “bohm”) are two ways to say something’s good, but there are no two ways about how delicious Chef Chico Mendonça’s Portuguese food is! Classics such as spicy Piri Piri chicken are available alongside Mango Painted Fish Tacos. Chef Chico is known to be very particular in the way his food is assembled in order to bring out the best in his textures and flavours.

Mango Painted Fish Taco: Fresh tilapia dredged in Bem Bōm blackening seasoning, sautéed  and served with house slaw, avocado, serrano sauce, and  mango paint vinaigrette (named so because of its vibrance and Chico’s tendency to “paint” this work of art).

Sushi & Seoul On The Roll

Craving a work of art for lunch today? Sushi & Seoul On The Roll is prepared to absolutely dazzle you with their Japanese and Korean creations. Owner and sushi chef Al Ruiz proves you can absolutely get excellent fish off a truck! From Tuna Kobachi to “Smoked Stacks” to Pork Belly Donuts, this creative and fun-loving truck is keeping Orlandians guessing! Voted Orlando Weekly’s “Best Food Truck 2013”.

Forget everything you know about Swedish cuisine — this is far from furniture warehouse meatballs. Former drag racers Viveca and Håkan Averstadt are doing high-speed Swedish cuisine at SwedeDISH! You’ll find the legendary Thor (aka Viking Dog), a crazy hot dog, crab, and mashed potato creation often found on the streets of Stockholm. Traditional meatballs are a must, along with a killer surf ‘n turf burger made with Swedish spices. They’ve got Orlando saying, “Mmm… läcker!”

Thor: The Viking Dog. Swedish thin bread wrap stuffed with an all-beef hotdog, homemade mashed potatoes with Swedish spices and dill crab salad. The God of Thunder himself couldn’t make tummies rumble like this wrap does!

Treehouse Truck is taking beloved childhood sandwiches to the extreme! From their GC Luther (a grilled cheese donut burger), to their habañero Hot Ness burger, to their deep-fried Mama’s PB&J, every sandwich they offer is like a delicious — and undoubtedly irresistible — double dare! Everyone’s welcome in this clubhouse of yum!

Hot Ness: A whole habañero pepper mixed into an all-beef patty, grilled and topped with melted American cheese, fresh cilantro, tomato, and drizzled with sour cream on a toasted bun. It packs heat, but it packs even more flavour, which wins over even mild tastebuds!

Papa Nick’s Roast Pork: This homage to Vinnie’s poppa features Italian-style roast pork blended with fresh herbs and spices. Roasted for 8-10 hours and served on an Italian roll with sharp provolone and topped with broccoli rabe.

Mama’s PB&J: Only the best mama would make you this sweet sensation. Peanut butter, jelly, banana, and Nutella sandwich dipped in a secret batter and deep-fried. Don’t forget to share like mama taught you!

This English-inspired food truck was voted Orlando Weekly’s “Best Fish ‘n Chips in Central Florida” — and boy, do their giant whole filets live up to the title! Cafe Rouge Express has a wide selection of the Queen’s food, including Shepherd’s Pie, Chicken Tikka Masala Flatbread, and Bangers ‘n Mash. Their rotating daily menu also includes other more global favourites include Mussels & Frites, Escargot, and even a Beer-Battered Cheesecake!

Fish ‘n Chips: Fresh haddock, beer-battered and fried in a secret Cafe Rouge blend of oils. It’s actually double-fried, once in a lower temperature vat to cook the fish, then in a higher temperature to crisp up the batter. The result is fish that tastes like it’s been steamed! Served with brined and double-fried chips, and a side of housemade tartar sauce.

Shepherd’s Pie: From a family recipe so old, it had to be laminated! Beef, carrot, onion, celery, rosemary, thyme, and a port wine demi sauce underneath a blanket of fluffy mashed potatoes and cheddar cheese.

Beer-Battered Cheesecake: Classic New York cheesecake on a graham cracker crust frozen, battered, and double-fried so that the insides are slightly gooey and fully yummy. Topped with cinnamon sugar and caramel.

Chef Clarito Macalad and his wife Bonnie are running the only food truck around that uses fresh organic produce and fish from their backyard aquaponic farm. Curbside Chef serves some serious globally-inspired meals like Banana Leaf Baked Tilapia — with ingredients harvested straight from their farm! You won’t find a more dedicated food truck owner anywhere — and it shows in his extraordinary food!