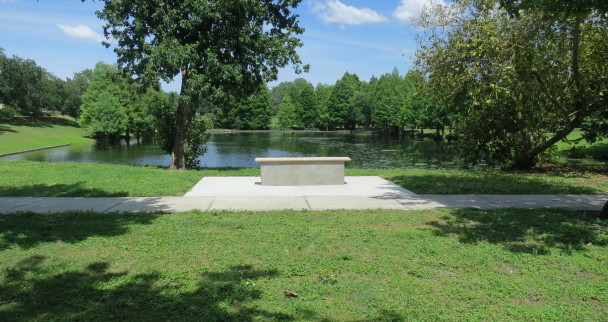 Two years ago this month we lost our Boston terrier, Jakue. One of his favorite things to do was run around the Greenwood Urban Wetlands Park just by Anderson St and Mills Ave [GMap].

The day after he passed away, we took a trip to the park to reflect on his life. We thought it would be great to purchase a tree and have a plaque placed in his memory at the foot of the tree.

When we inquired about this, we were told those were no longer allowed.

We reached out to Commissioner Patty Sheehan, a pet lover herself, and suggested that maybe a pet memorial be added to the park since they’ve been making the park more dog friendly.

The Families Park & Recreation department has now added a pet memorial wall to the park. Residents can purchase a plaque to memorialize their pet for $150 or $200 (depending on how many characters).

“I think it is important because I have received many inquiries over the years from people who lost a pet and wanted to memorialize it in some way.  The wall provides a place for people to sit, as well as a surface upon which we can affix recycled memorial stones etched with the names of their beloved pet,” Sheehan told us in a conversation about the memorial.

The money raised from the sale of the granite plaques will pay for the construction of the wall. Sheehan tells us that if the program catches on the money will be used to build another wall.

We’re excited that our plaque to memorialize Jakue will be up soon.

Residents interested in purchasing a plaque can fill out this form and return to the City.