UPDATE Tuesday June 17, 2014: The project received approval from the Municipal Planning Board and will now head to City Council.

The Princeton project where Princeton St and Smith St split just east of Edgewater we told you about last month is headed to the Municipal Planning Board next week for approval.

The new 228 unit apartment complex requires approval by the board because it’s a new planned development and the zoning needs to be adjusted to allow for higher density and allow the building heights to lessen slower than what is currently required.

The development fits mostly within the Edgewater Drive Vision Plan with the exception of the exact way the developer wants to scale down the building as it blends into the neighborhood.

When the Edgewater Drive Vision Plan was created the plan called for any future development on this lot to start with a maximum of seven stories, then go to a maximum of five and then to three.

Because the proposed development does not sit directly on Edgewater (the retail that currently houses CVS, Tijuana Flats and Subway will remain along with some surface parking) the project does not decrease building height quick enough.

The new development would generate 2,254 vehicle trips per day. That’s about an extra 1,300 trips. At peak hour that would mean an extra 100 vehicle trips.

The development would increase on-street parking and provide 48 spaces in the existing surface lot and 49 spaces on the ground floor of the parking garage for retail. The reminder of the garage will have 390 spaces for residents.

That ends up being around 500 total spaces when you include the on-street parking. A development of this scale only is required to have about 400 spaces to meet city code.

The project could also help the Edgewater intersection by removing a lot of the curb cuts along Princeton St and Smith St. There would be a cut for the retail parking and one for resident access.

The developer has also proposed to create not only the required streetscape improvements along the setbacks of the property but also has proposed improving the splitter island that sits just west of the property and adding a bus pull in lane along Smith St for a potential LYMMO expansion. The developer has held information sessions throughout College Park and has taken that feedback made minor changes to the plan to accommodate the community. This included a separate entrance for residents and making minor improvements to the exterior to make the three-story part feel more like individual brownstones versus attached apartments.

The project will go to the Municipal Planning Board on June 17 and then to City Council for approval. The staff is recommending approval of the project.

Here are some more renderings of the project: 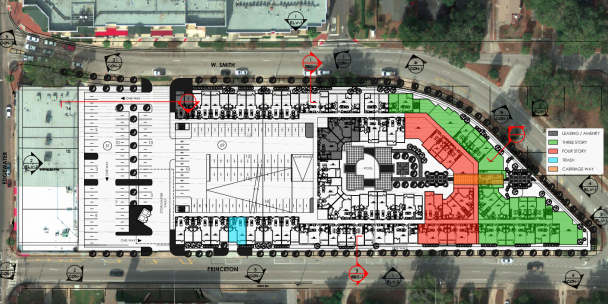