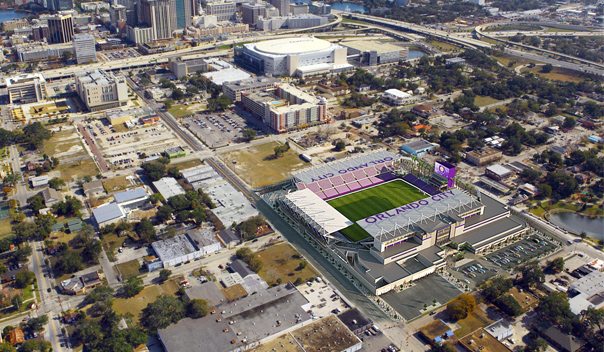 The City of Orlando has moved the site for the soccer stadium slightly west of the previously planned location.

The stadium design we shared back in June remains unchanged.

The City had been attempting to acquire land from the Faith Deliverance Temple including filing for eminent domain.

They have now dropped their eminent domain case and are shifting the site of the stadium slightly west. The stadium will now sit on top of Parramore Ave north of Church St [GMap].

At last weeks City Council meeting the City acquired land from the Black Business Investment Fund. This was the same parcel that the City had sold to BBIF for $814,000 in 2005.

We asked Cassandra Lafser a City Spokesperson about the purchase last week and here’s what she had to say:

With the downturn of the economy, the Renaissance at Carver Square never came to fruition. BBIF approached us about the opportunity to purchase the site from them.  This property has been identified as a cornerstone block for the redevelopment of Parramore. The City currently owns the other properties on this block and it is beneficial for Renaissance at Carver Square property to return to ownership by the City of Orlando. This will allow the City to identify the most strategic and best use moving forward.

It turns out the best use was determined for site of the new soccer Stadium.

The City had been trying for over a year to acquire the property that will now be just east of the new stadium.

Originally the city offered the church $1.5 million (more than double the appraised value). The church wanted $35 millions. The City countered with$4 million and the church with $15.

Ground breaking is expected this fall and completion in time for the 2016 season.

Here’s a look at the site plan for the new stadium and the complete press release from the City of Orlando: 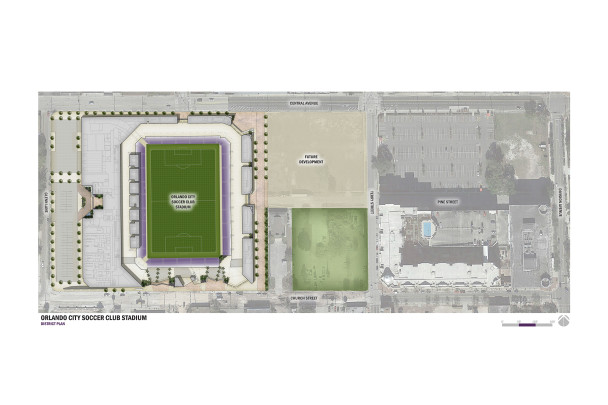 For 13 months, the City has been in active discussions with Faith Deliverance Temple to purchase the last parcel of land for the new Major League Soccer stadium in Downtown Orlando. In June, for the first time, the Williams Family expressed interest in remaining at the same location. Around this same time, BBIF expressed interest in selling the property at the corner of Church St. and Parramore Ave. back to the City.

Since this new opportunity arose, the City undertook an intensive due diligence process and determined a better site for the new Major League Soccer stadium is west of the original location.

“We are entrusted to be stewards of the taxpayer’s dollar and this new location will save the City money with a definitive schedule,” said Mayor Dyer. “This new site also allows for a larger footprint for the stadium, additional parking and opportunity for redevelopment.”

Additionally, Orlando City Soccer, who is overseeing the development and construction of the new stadium, announced it will form a committee of Parramore leaders, including District 5 City Commissioner Regina Hill and Florida Senator Geraldine Thompson, to help stadium designers incorporate elements of the community into the structure.