The Orlando Museum of Art is hosting two tandem exhibits; MetaModern and Harold Garde: Mid-Century to This Century.  The exhibits will open with a preview reception on Friday, September 25 at 7 p.m.
MetaModern will be on view until December 6 and Harold Garde: Mid-Century to This Century will be on view until January 3, 2016.
MetaModern features work by contemporary artists that pays homage to iconic design objects of the mid-20th century. This exhibition includes video, sculpture and works on paper by 19 international artists.
Harold Garde: Mid-Century to This Century is a collection of over 35 paintings representing the impressive span of Garde’s 70 year career. Garde was immersed in the New York art world just as Abstract Expressionism was gaining worldwide attention and the collection is an ideal microcosm of the movements progression over the years.
There is a special screening of Dale Shierholt’s documentary on Harold Garde, “Art & Spirit” at 1:30 p.m. on Sunday September 27 at the Orlando Museum of Art that is free to the general public. Watch the trailer below.

Here are a collection of photos of some of our favorite pieces, most of which are modified Eames chairs. 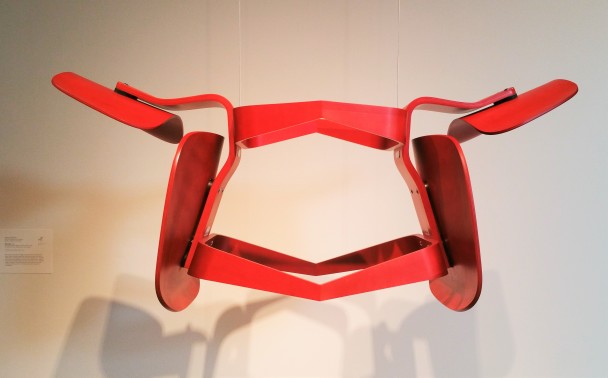