According to paperwork filed with the City of Orlando, a cafe is looking to open on the corner of Orange Avenue and Washington Street in Downtown Orlando [GMap].

The 6,295 SF first floor retail has been vacant for years and was once used as a bank. The building was originally built in 1942 and is considered a rare example of the Art Moderne Style. It is a contributing structure to the Downtown Historic District. It was built by Joseph Rutland to house his men’s clothing store and designed by Orlando architect, F. Earl Deloe. IT was expanded to five stories in the 50s.

The applicants, Wayne and Caroline Harvey, filed with the Historic Preservation Board to remove a built-in ATM machine and storefront window, in favor of a new “operable door and folding door” system for access to a new sidewalk cafe area. 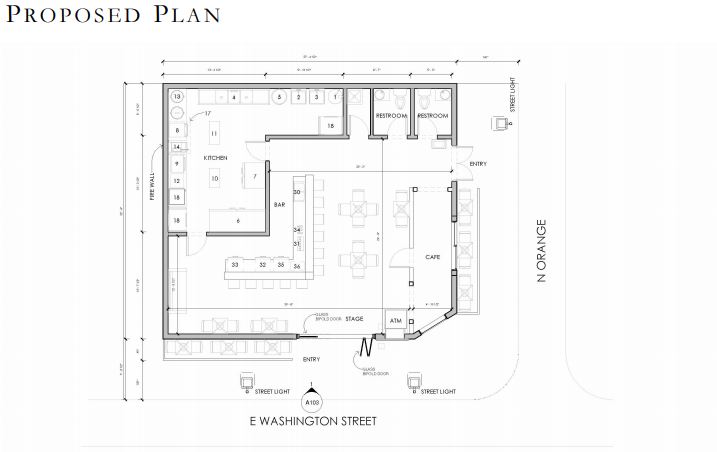 Plans also include areas for a stage, a bar, and cafe seating on the Orange Avenue-facing side of the building as well.

No information was shared as to the nature of the business looking to open this concept, but the equipment list included a “rice cooker,” a “pizza prep table,” and a “turbo chef fire oven.”

We will share more information on this project in the near future.