Special thanks to Kiwi Camera Services for making this episode possible. They provided the instant film you’ve seen in this episode and the previous episodes with both mayor Buddy Dyer and the owners of Wally’s! 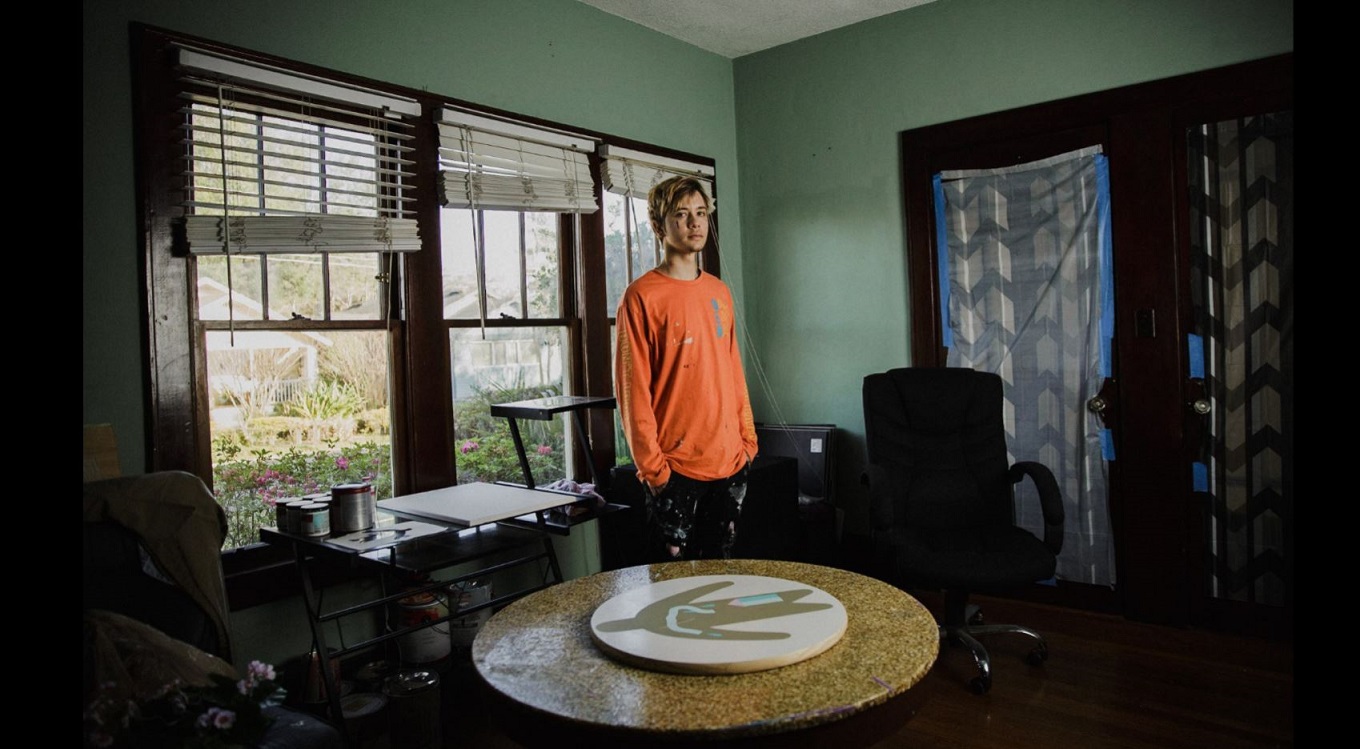 Who are you?
My name is Halsi. I am 20 years old, and I’m from Orlando Florida.

Where are we currently and what is the importance of this space?
We are at my house on Mill’s, pretty close to downtown. I’ve lived here for seven or eight months now. This is my studio space, then I have my bedroom. 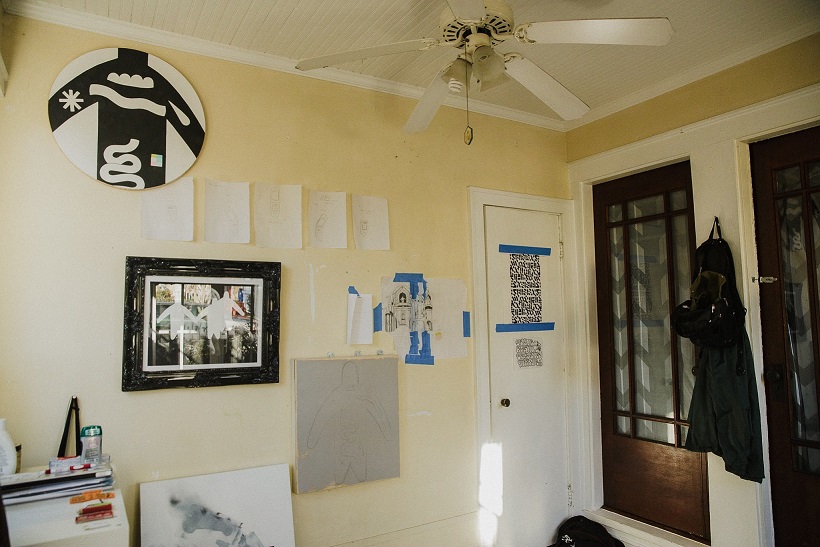 You say it’s a studio. Are you an artist or what do you do?

I’m a visual artist, primarily a painter but recently getting into more taking my 2-D paintings, illustrations, and designs, and translating them over to 3-D sculptures.

Can you give some examples for people who wouldn’t know what that means?
I have a character that I do. When I draw this character, he has a certain shape, he resembles a human form. I’m trying to translate that into a 3-D statue where it’s the guy in the form of a couch or a stool or a chair. Just trying to translate it into useful items that people use every day.

How long has that been a figurehead of what you are doing?
Since I was about 17. I’d been doing stuff for awhile, but I never found  my trademark or style. I was doing whatever. And that kind of pioneered the style that I have now. I still use it and a lot of stuff I do has been built off of this character. Whether it be the character, the form itself, or the style in the sense of the clean lines and the color schemes. The character started it all and that’s kind of like my hallmark.

Does he have a name?
No, just a human. 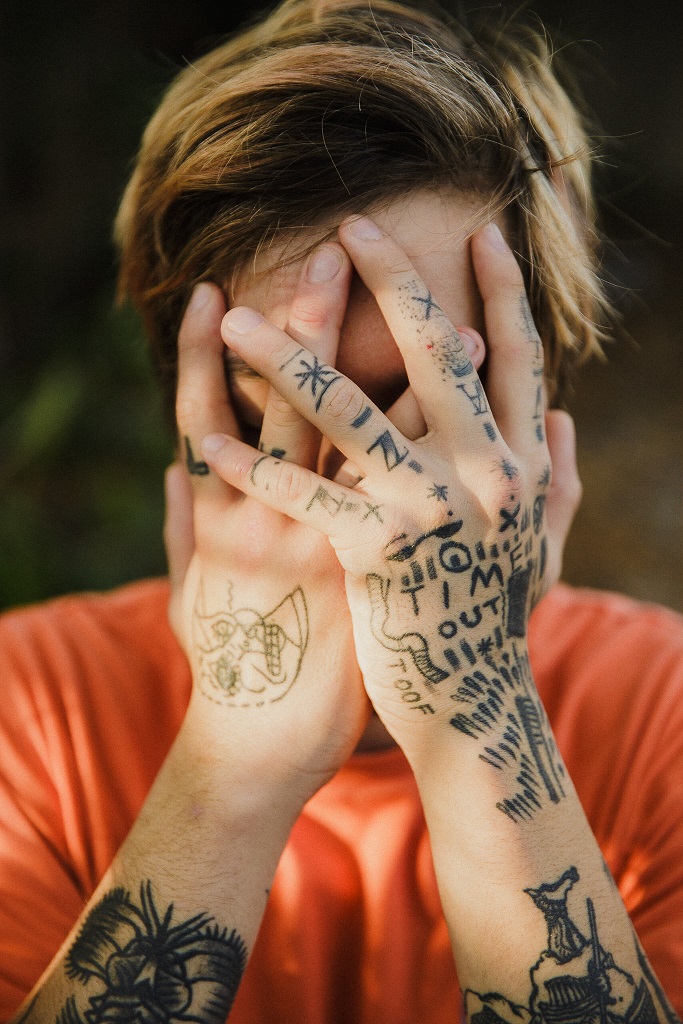 How long have you been doing art; both for fun and as a career?
When I was 12, I went to an art show. I met Tobar, a local artist. At the art show there were more flyers for other art shows. I picked up flyers and I went to another one. Then Tobar introduced me to Swam, Swam introduced me to Peterson, it keeps going. At first it was a social aspect. Everyone was really cool, interesting, [and made] cool stuff to look at. Instead of just coming out and being a patron, I started to actually create art. That’s what I wanted to do since then. I don’t really have any other desire to do anything else.

When we first met, you mentioned that inspired you to dropout of school because you felt like school was prohibiting you from fully pursuing your career as an artist. Can you tell me a little bit more about that whole process? There’s not a whole lot of kids that I know of that drop out with a clear, positive purpose.

That was my whole thing. It was such a waste of my time. I just remember a quote it was like, ”You have all the time in the world to make all the money you want, but you only have so much time.” It’s like, you can’t buy more time per se, no matter how much money you have. 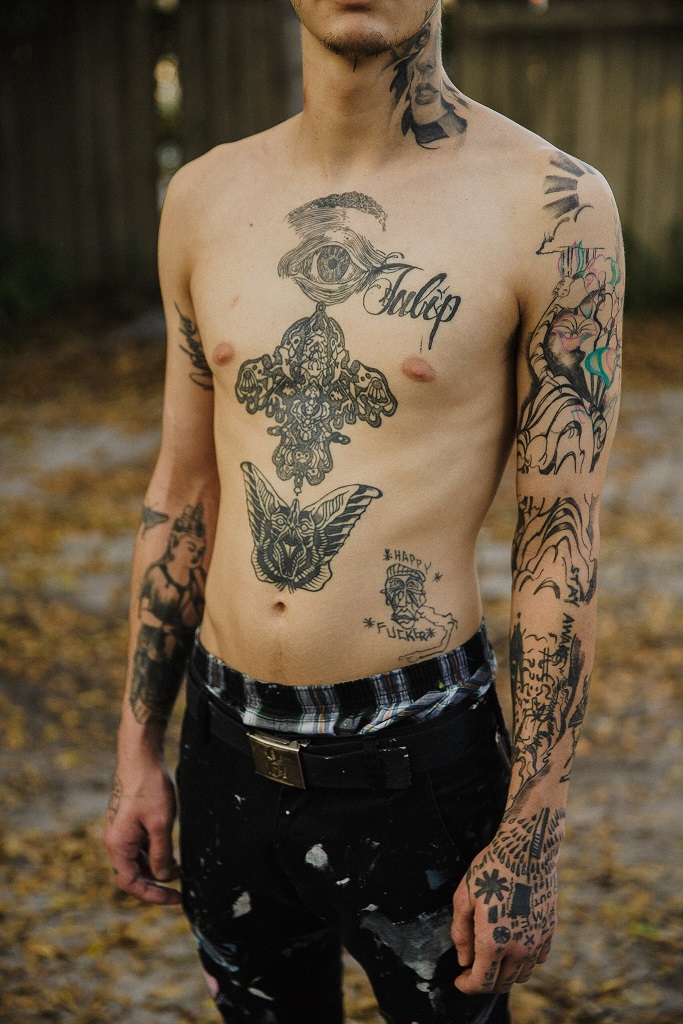 Do you feel like you’ve been successful since then with being an artist, a career artist?
I think I’ve been successful at not wasting my time. I think, that’s the biggest thing. I’ve been successful at having a good time, having fun. Also, I think I’ve gotten to a point in my artistry where I’m not comfortable. You never want to be comfortable. But it’s a good place. You’re climbing the mountain and there’s a spot and you’re like, ”All right, I’m going to chill here for a little bit before I make the other 200 foot ascent.” So, it’s a little relaxation place for putting in all this work, and I’ve gotten this far, but I don’t think I’m necessarily successful as an artist yet. 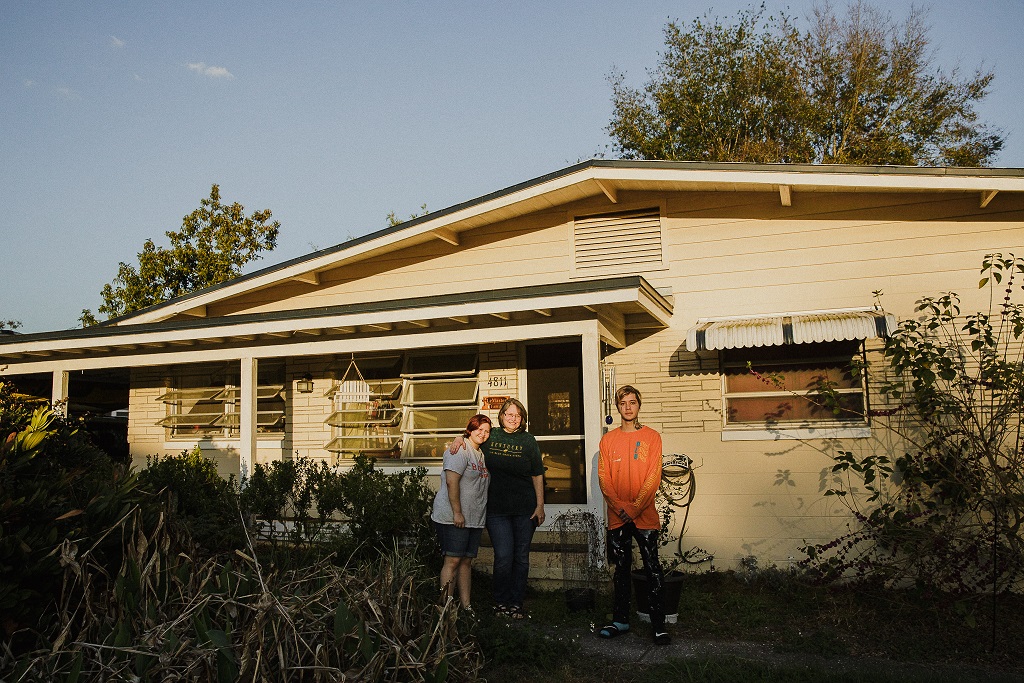 Can you tell me about your original home? (Heads up, we actually drove to his house, knocked on the door and asked if we could take some photos outside- the kind lady who now lives there ended up inviting us in to see a painting that was still up in the backyard that Halsi painted as a kid.) 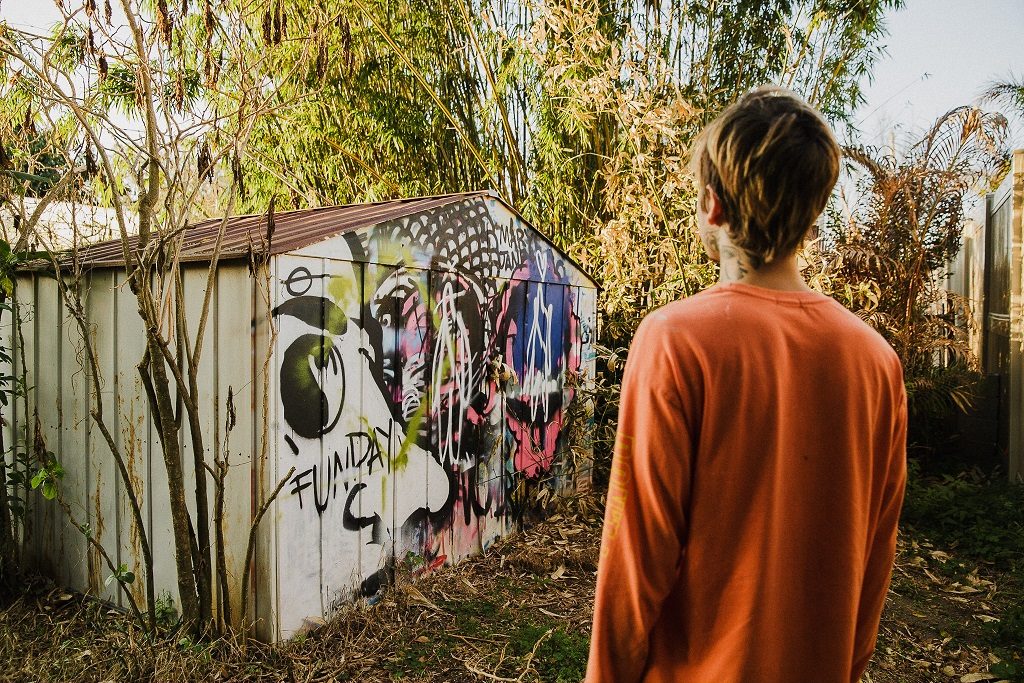 Yes, it was nice. There was a lot of symbolism in living there because I grew up in that house and we had AC but we never turned on the AC, very rarely when it got super cold in the winter or those five days out of the summer where it went to like 105 or 106. All the other times, we just had to sit with fans going with the windows open and a bunch of other oscillating things set up everywhere.

Also, we had a washing machine and dryer, but if I wanted to use the dryer, I had to pay five dollars each time. We’d hang our clothes out on lines. It was probably the smallest house in the neighborhood. 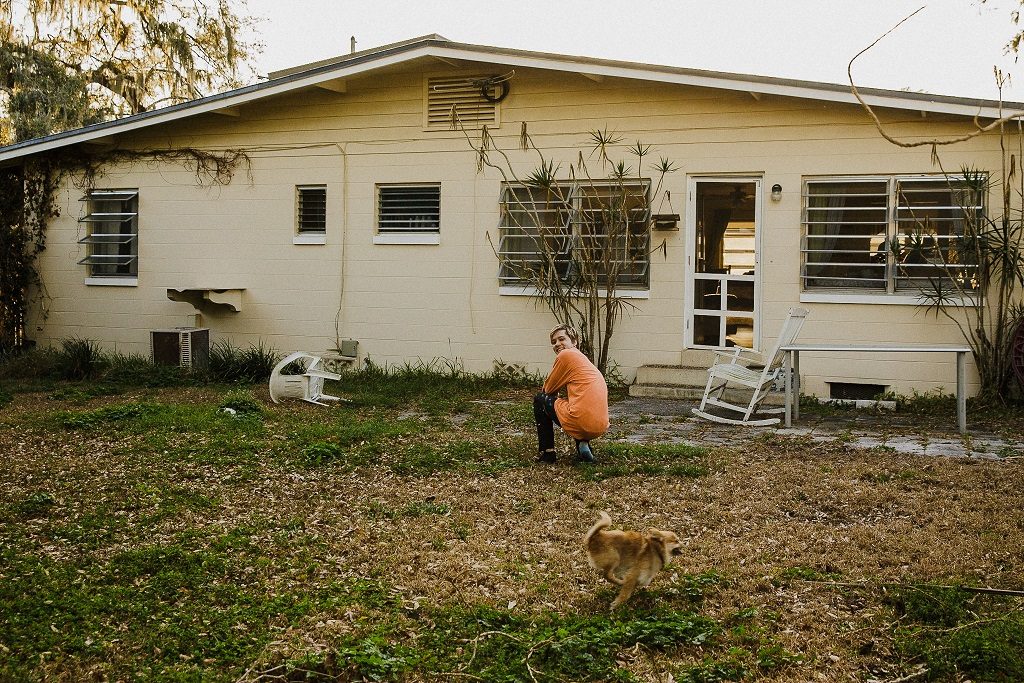 There were a bunch of mansions, big houses with pools out on the lake. I was living in this house, hanging up my clothes. Our lawn mower was one of the push lawn mowers where it cycled. I would see Porsches and Mercedes drive by because they had to go through our street on Fern Creek to get to their houses in the back. It was like this symbolic metaphor in a way because they had to drive past my house to get to their house. There was a sense of “Everyone’s running the race at a different pace, but you never escape it.” You shouldn’t really forget where you came from. You should never give that up. I’ve hopped in and eaten bread from dumpsters. No matter where I’m at in life, I should always be prepared to hop in a dumpster and eat some bread or something.

Is there anything on the horizon for you that you want to share?
Currently, I’m organizing an event called Secret Garden. It’s an exhibit of art, music, and fashion. It’s going to be at Henao Contemporary Center, April 21st. The whole theme about it, it’s for the youth/millennials I guess is the label we have.

Secret Garden is an event where creators and younger kids can come out and experience something liberating and it all has an underlying message, Because a lot of the installations we’ll have will be built out of recycled materials. Sculptures made out of trash, and recycling bins everywhere. A lot of the musicians we’re bringing in, their music is about racial and social inequality.

There’s an event page up for Secret Garden. Be sure to check it on April 21st and follow Halsi’s instagram to see the other work he’s creating @secret.halsi.