I Wish This Was is a monthly series that transforms ignored, vacant lots and properties in Orlando into something the City Beautiful can be proud of. This series is made possible by our partnership with Interstruct Inc., a leading design and construction group based out of Orlando, and its founder, architect Ryan Young.

This month’s I Wish This Was column takes a look at an empty lot in Downtown Orlando, located at the corner of Pine Street and Orange Avenue [Gmap]. 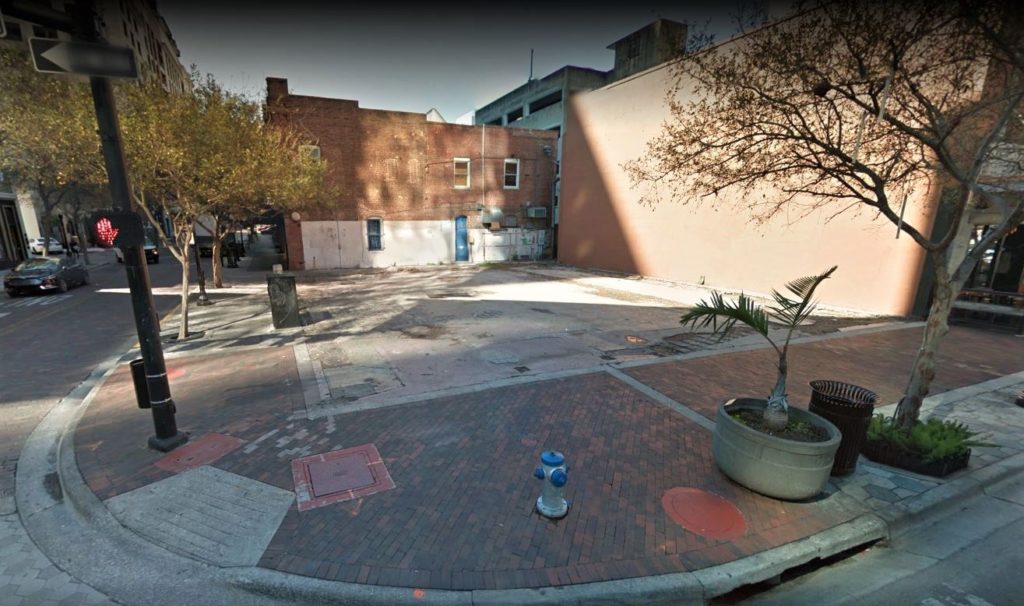 This corner is one of the busiest intersections in Orlando, and yet this lot has been vacant for over a decade. The building that had occupied that corner was built in 1886, but burned down. Click HERE and skip to the 45:04 mark to hear Richard Forbes on a recent episode of Townie Tourist, to get a greater sense of the history of this property.

Young suggests plugging in a temporary architectural intervention that could activate the space, but at a pedestrian scale.

To allow for the temporary nature of this project, 12 dumpsters will be thoughtfully placed on the site before being carefully tack-welded together to maintain position. Then they will be filled with soil and outfitted with a temporary irrigation system to allow for the installation of plants and landscaping.

The landscape would need to be modern and inviting to ensure maximum use by the public. The decking and seating would be built out and attached to the top edge of the dumpsters so you could still see hints of the structures, within the layout.

Steps could be built on the street corner to access the platform and would also be used for seating, or a pop-up stage for street performances.

An art niche/outdoor gallery wall would be placed on the Pine Street side to showcase local Orlando artists and change on a monthly basis. CityArts Factory (Facebook | Website) is located just across Orange Avenue from the pop-up park, and would be ideal partners for a project like this.

Artwork and murals on the walls that frame the courtyard would be created to showcase local artists. The artwork in the rendering shows a collection of works by Stephanie Wood, the late Morgan Steele, German Lemus, Peterson Guerrier, and Samantha Shumaker, just as examples.

This project could be carried out with minimal funding from corporate sponsorships and City support.

Editor’s Note:  We did a previous post on this same property HERE, where we wished for it to be a “projection park.” If you see an I Wish This Was concept that you’d like to make happen, reach out to us at [email protected]